The big hobgoblin roared and swung a huge curved blade at the party. Behind him, two goblins had been looking at a map on a table. They also sprang forward, blades drawn.
Nemon and Gruffydd took the big one, while the rest went after the goblins.
Gruffydd landed a hammer blow squarely on the hobgoblin's chest. He staggered. Nemon, shield bashed the boss further back, knocking the hob into the table, shattering it.
Meanwhile, the others wee picking off the goblins. Seeing his leader down, one of the goblins made a run for the door. he was struck by an arrow and a bolt, dropping him. 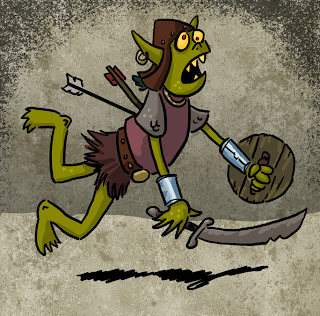 The winded hobgoblin was trying to stand when Gruffydd hit him again. The boss took it and slashed with his sword. The dwarf fell, but not wounded. The hobgoblin stood above the dwarf, ready to finish him. That's when Nemon's throwing knives hit him. He stepped back, knives sticking out of his orange chest. The hobgoblin leader dropped to one knee then fell forward.
Two golden torcs were found on the goblins along with shining silver gauntlets.
The big leader had a small bag tucked under his belly sash. It had 8 sizable gems in it. Most importantly, a map was found. Not a map of the Well of Souls, but of the Wall. Diagrams and movements were scrawled on it.
Someone was planning a coordinated attack on Wall soon...

Posted by BaronVonJ at 8:52 AM