Known as the god of War, also called Kral, Kullas, Lord of Battle, Master of Swords, Lord of Crows.
One of the Six Who Reign Above
His symbol is the sword, or in the North the battle axe. He is often depicted as a great lord in glittering armor or a bare chested bloody barbarian. Though not given mastery of the skies he is sometimes worshipped as god of thunder and lightning and also on cold, desolate places.

Krolos has a strange duality. He is a once a symbol of the strategy of war. The calm thinker and planner. The embodiment of the nobility of battle.
But, he is also war's ruthlessness and brutality. Those filled with the blood rage of battle are said to be possessed by Krolos.
Most of the early tales of Krolos revolve around his great battles with giant beasts of legend or other gods themselves.
One such battle involves the birth of the place known as the Sundered Hills. Legend has it, long ago Krolos, the Lord of Battle, went to Vaul, the Maker of Things. Krolos asked Vaul to make him a great war hammer that would be the envy of all who beheld it. Vaul agreed, and labored many days and nights to complete it. When the hammer was done, Krolos stared in wonder at its beauty and might. Vaul asked for payment. Still in awe, Krolos said he would pay anything for it. Vaul asked for the hand of Valena, goddess of love, and sister to Krolos.
Snapped from his trance by these words, Krolos laughed and refused Vaul his payment. The god of the Forge was enraged and snatched back the hammer. The two fought.
Their battle spilled into our world. They wasted the land in their struggle, and thus the Sundered Hills were born.
Children of Krolos are the great heroes of old. Thurn the Splitter, Ulkess of Arnar, Goroth the Mighty and Kell the Black to name a few.
Paladins of Krolos always are at the head of every battle line. His clerics bless the common soldiers before every fight. Both are always where the fighting is thickest.
After the battle, it is said the Lord of Crows walks the corpse strewn field selecting bravest for his blessings. Krolos's daughters take the souls of the bravest warriors to serve as his own bodyguard. They spend an eternity feasting and fighting.
Whether common soldier or emperor, Krolos is an indifferent master. He only rewards the brave and the bold with victory. Cowardice leads only to his punishment. 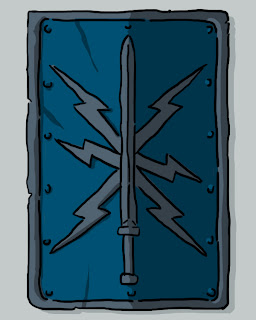 A well used shield most likely carried by the 8th Legion of the Carro Dynasty, proudly emblazoned with the sword of Krolos.

Labels: Gods and Goddesses
Newer Posts Older Posts Home
Subscribe to: Posts (Atom)
All drawings, maps, illustrations, and plans on this site are copyright of the author. Their use without consent is prohibited.