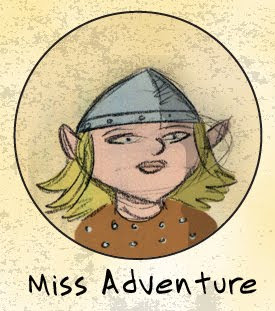 It was only a few months ago when a young halfling women arrived in Wall. She appeared from nowhere, and seemed ready for adventure in her polished armor and equipment. No one knows her real name, as she wants only to addressed as Miss Adventure. It is assumed that she hails from the Green Warrens, as most halflings do, the lands granted to halflings by Emperor Thaddeus in return for a particularly good halfling meat pie.
But, this is all speculation.
After visiting the tavern, The Hole, Miss Adventure found some companions for her first outing Beyond the Wall. She proved to be the party's lucky charm, finding traps when no one else did, spotting danger and generally being cool headed in most of their fights and encounters. Her one exception to this would be her immediate dislike of Newly, a dryad who has helped the party on several occasions. While the adventures trusted the dryad, Miss Adventure wanted her dead.
Miss Adventure has been a cool, calculating member of the party, keeping her thoughts to herself, and only speaking to make comments dripping with sarcasm. Her acquisition of a pair of Boots of Speed has made her the envy of at least two members of the party. As yet she has not giving in to the piles of gold they have offered her for them. With the money she has won herself, she has managed to rearm, and re-equip. She spends most of her time waiting in a dimly lit corner of the Hole, alone, ready for the next  jaunt Beyond the Wall.

Miss Adventure is played by 11-year-old daughter, the only girl amoungst a band of smelly boys and weird old guys.
Posted by BaronVonJ at 7:29 AM 2 comments: 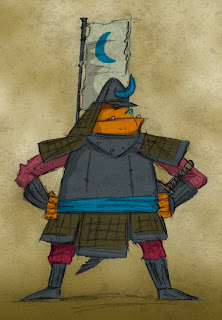 For generations, the very worst criminals met their end at the Gallows Tree. It stands at the end of long road. Which road? Depends on who you ask. It never seems to be in the same spot these days, and it lays Beyond the Wall now.
Besides it's variable locale, the area around the tree seems to have its own rules. The air switches between a foul, almost unbreathable miasma and the perfume of flowers. Time is off. Hours may pass in the blink of an eye, or not pass at all.
Some people hear voices or hysterical laughter. Sometimes corpses hang from branches, dripping blood and offal, but most times not.
So, traveller, if your road leads you to a dark, leafless tree, step off the road and find another path. 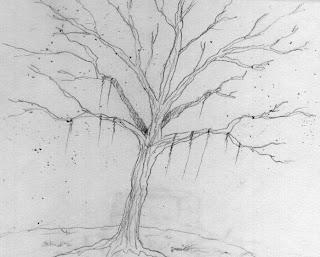 The Well of Souls

Somewhere, Beyond the Wall, on a secluded, wind blown hilltop, lies the Well of Souls. There are no signs of the people who dug this well, or why it lies in its current location. Those who know of its location are few. Its only description is of a low stone circle atop a hill. The area surrounding it is cluttered with spikes and grappling hooks and bits of old rope. These are the only remains of those who tried to climb down into its depths.
If you listen carefully, it is said, you can hear their low mournful cries. 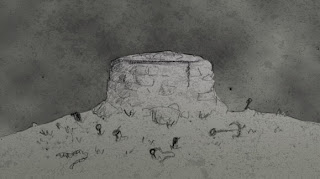 Posted by BaronVonJ at 7:44 AM No comments: