Gruffydd went to stand above the body of Newly. She looked like a log pulled from the fire. A burnt husk. The dwarf went to touch her, but she turned to ash.
All was quiet.
Miss Adventure began fumbling through the ashes. Gruffydd was about to say something when the halfing pulled something shiny from the mess. She lifted into the cold morning. It was a lrge seed, the size of an egg. Golden.
Without hesitation or a word, the party began hacking at the frozen ground. When they had a small pit, Miss Adventure gingerly placed the seed into the hole and began covering it up.
Next, they hauled as many of the stiff guardsmen's bodies onto the horses as they could, along with a hobgoblin standard, and a few black masks. Laden with gold and the dead, they returned to Wall... 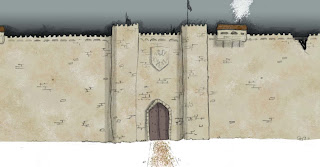 From the moment they emerged from the Well, they felt hunted. Sometimes, by the very weather itself. The wind blasted them, the snows deepened, and always hounded by a feeling of dread. It took a day and night to find the ford. They had dared not try to make it past Ol' Nick at the bridge. Better to face the hornet things at the river crossing. The cold had kept the things inside, but the river was half frozen, making the crossing treacherous. Miss Adventure went under, but was rescued by Gildrid.
The river claimed the packhorse and most of the supplies.
The party was exhausted by the time the weather let up. It was cold but clear when they neared Wall, and the abandoned logging camp that was the home of one of the party's few friends, Newly, the Dryad.
Before Gruffydd, on point, crested the hill that ringed newly's hollow, he saw blood in the snow. It was frozen. A black splash like ink on crisp white paper. And the smell of smoke.
He signalled to the others to lay low and approach slowly.
What they saw battle sight. Bodies half buried in the snow. Blood, red and black, frozen in large pools. Blackened trees, including Newly's great Oak. But no movement. The battle was long over.
THe party scrambled down the hill. Some of the bodies were goblins, some the larger hobgoblins bearing the blue moon badge they had seen in the caverns. There were humans. A few wore the armor and uniforms of the Wall Guardians, but most had dark hunting clothes, and a few black hoods. There were also elves and halfling. The party knew them. They were members of a small adventuring party also operating out of Wall.
They were too cold and tired to try and give anyone a decent burial here. Better to wait and call out the garrison.
Then, a gasp. Miss Adventure had gone to check on Newly. The halfling stood next to the burnt remains of Newly's tree. There, half buried in the snow, was a blackened form. It had the shape of an old woman. 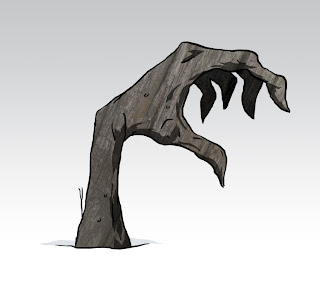 Labels: Gildrid, Gruffydd, Gustav, Mellion, Misadventure, Morey, Nemon
Newer Posts Older Posts Home
Subscribe to: Posts (Atom)
All drawings, maps, illustrations, and plans on this site are copyright of the author. Their use without consent is prohibited.