Before the roar had even faded, they were stuffing every bag, sack and empty container full of coins. Even the bag with their provisions was emptied on the floor and filled to the brim with coins.
When they could carry no more, they ran for the door on the opposite wall. It lead to room that could only be the Manticore's lair. What furnishings that existed before were now smashed to bits. The room was full of bones of various humanoids and remnants of clothes. Another loud bellow from the darkness and they quickly moved to the next room.
The smell hit the party first. This room was covered in dried blood and festering corpses. Piles of offal filled every corner. Retching, they moved to a closed door.
They emerged in the long hallway they had been to before. When another roar came, it was close enough to fee reverberating from the walls. They ran. Coins clanked and clinked on the floor behind them  leaving a glittering trail.
When they came to an intersection they turned left an ended up facing a barred door. It was iron bound and sturdy.
Another roar. This one filled with pain and hate. The monster had found it's mate. No where to run. No time to listen at the door. Nemon and Gruffydd hacked and smashed at the door. It gave in with a crash.
They poured into the room fearing the other manticore was right behind.
This room was full of Goblins. Lots of goblins.... 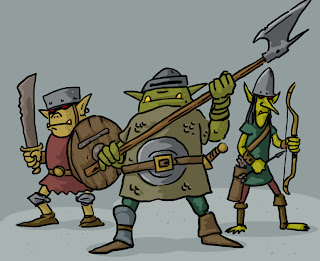