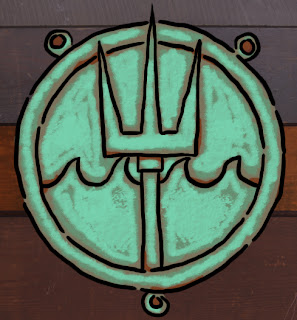 Ul-Merr
Known as the Lord of the Sea, also called Murr, Urras, Deep Father, Master of the Depths, Master of Storms and the Taker.
One of the Six Who Reign Below
His symbol is the trident, or the kraken. He is often depicted as a bare chested, green bearded man or a great merman or squid.

Ul-Merr is brother to Arnor. To him was given mastery of the seas. As Arnor is distant and aloof, Ul-Merr is rash and inconstant as the sea. He may speed a ship along its way with gentle winds, or just as easily smash it against the rocks.
Seafarers often affix his symbol to the prows of their ships with three nails. Three being Ul-Merr's sacred number. Cautious captins make three sacrifices before each voyage. First is a gift of gold, as Ul-Merr delights in shiney objects. Second is a gift of food. The third must be a gift of blood. It is said, those who die at sea, become servants of the sea god, denied passage to Gates of Morr. Thus, one of his names id the Taker.

Ul-Merr has taken no wife. Instead he delights in enticing mortal women. He rarely stays long enough to see the birth of his offspring. Many women die giving birth to a demi-god. Those progeny that survive often become lesser gods of rivers and springs, most with their father's temper.

When not bedding mortal women or smashing ships, Ul-Merr hunts the depths for those vestiges of the dark gods. Mammoth creatures of the deep.
Posted by BaronVonJ at 9:06 AM 2 comments: 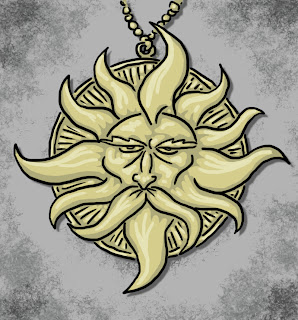 In the beginning, the primordial World was ruled by the Old Ones. Dark gods of chaos, ever changing as the planet itself. They were entropy and darkness incarnate. Then, came the One. The One was a light in the darkness. The One fought the dark gods and destroyed them. But, in the battle, the One became fractured, some say wounded. Depending on which priest you ask, the One either bled twelve single drops of blood onto the now stable world, or split into twelve pieces.
These twelve pieces became the pantheon of today. They are known as the "Twelve-Who-Are-One", or more often "The Six who Reign Above and the Six who Reign Below".
These gods have many aspects of themselves, versions that represent different things to different peoples and races. They have many names. In the Empire, Krolos is the god of War. To the men of North, the Thundri, he is Kral, god of War but also of Winter, and cold forgotten places.
The priests would have us believe they take very active roles in our lives. Their works, they say, are all around us.
Most adventurers will tell you they have seen many strange things. A whispered prayer that saved them from a dark beast. A talisman that holds back the dead.
To begin, we should start with the Father...

Arnor
Known as the Father, also called Aenir, Aesirah, the Lord of the Heavens, the Sun King and the Traveler.
One of the Six Who Reign Above.
His symbol is the sun and stars. He is often depicted as bearded man crossed with a sun, or wind manifested as face blowing clouds.

Arnor was first to rise from the One's ashes. As such, he chose mastery over the sky, the air and the sun. And with it he became Lord of Light. He is also master of Order and Law.
Travelers often pray to him to light their way, but it might just as often be a farmer, praying for good weather. But Arnor is an aloof god, as befits his station, distant from the world of men, He is neutral in his stance and really only intervenes when the forces of Chaos might prevail.
Many a priest or paladin chosen by Arnor spend their lives tested by their faith. The Sun King does not shower his faithful in gifts, but those who stay in his service often become those heroes of history.
Long ago, when the Empire was born, the first Emperors chose Arnor as their symbol. Even though Emperors through the ages have added their sigil to the Imperial standard, it is always surmounted by the sun of Arnor.
Arnor's wife is Nyalla, the Mother. As Arnor is master of those things above, she holds sway over those below. Theirs is a contentious marriage, as anyone who has witnessed a tornado or earthquake will tell you.
Posted by BaronVonJ at 11:09 AM No comments:

Labels: Gods and Goddesses
Newer Posts Older Posts Home
Subscribe to: Posts (Atom)
All drawings, maps, illustrations, and plans on this site are copyright of the author. Their use without consent is prohibited.