The crazed barrel chested goblin was hacked in two by Nemon's sword. This prompted the rest of goblins to attack. They came in one big rush. Nemon stepped back into the cover of the southern passage. The goblin horde was forced to not only split their attacks, but become funneled down the hallways, thus reducing the effect of number.
Gruffydd and Nemon took the brunt of the assault, being at the front of their groups. That didn't keep the elves from firing over their backs. Two greenskins died this way, arrows in the face.
Next, the hobgoblins cam roaring in. One managed to stab Gruffydd with a jagged spear, but didn't do much damage before the dwarf's hammer caved in his face. Miss Aventure had crawled under the fight and was jabbing at ankles. Anyone goblin who fell was quickly dispatched.
Soon, only one hobgoblin was left. Surrounded, he gave a defiant war cry before Gustav crushed his skull.
It had been a bloody fight. The party had only been scratched, thanks to the carefully laid ambush, but they were covered in black blood. A quick search of the bodies yielded more electrum. Where was all of this rare coinage coming from?
Despite, Gustav's constant urgings to "go back and grab the dragons", the party headed down the south passage to a door. Shouting was heard behind it,
Nemon kicked the door in. It was a small, filthy room full of debris and junk. In its center stood a lone, dirty goblin. Instead of being frightened, he smiled and grabbed a  sputtering candle. With this, he lit the top of jar at his feet. He picked up the flaming jar and cackled at the adventurers. 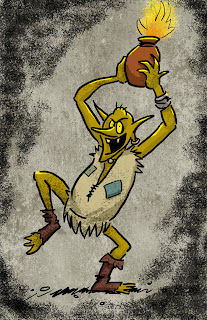