The Lord High Marshal of Wall 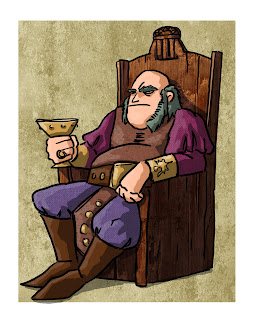 Otho Baldrac has been Lord High Marshal of Wall for more than 30 years. Unlike the rest of the Guardians of the Wall, the position of High Marshal is not hereditary, even though his father held the title before him. Otho's father Baldwin was Lord High Marshal during the last Great Incursion and had fought bravely defending Wall. He was awarded the the Order of the Dragon by the Emperor himself for his actions.
Otho had a lot to live up to. Baldwin was a very tough man, and expected great things from his sons. Otho was the second oldest and spent most of youth away from Wall, studying at the capital. In reality, Otho was a political prisoner. His father had become a bit a of a hero. In the politics of the Empire, famous generals, easily become new emperors. So, Otho's schooling was paid for by Baldwin's political enemies, but held captive against his father's ambitions.
This was to change, however, when Mallian, the oldest, and successor to Baldwin was killed in a failed expedition Beyond the Wall. Otho was quickly recalled to the place of his birth, but a place he hardly knew. The student, would have to become the warrior.
Otho's training began in the Underguard, those tireless tunnel fighters who protect Wall from below. From all accounts, Otho served admirably, taking to his new warrior role quickly. His father then began schooling him in the logistics of running such a far flung garrison. Here Otho's years of education paid off. He was an even better book keeper than fighter.
During this time, Baldwin began more expeditions north. Otho, more and more would take to the day-to-day running of Wall.
At age 25, Otho's father would be killed Beyond the Wall. An ambush by Hobgoblins was the story, but few believed it. Baldwin's journeys had become epics, song by bards across the Empire. The Imperial council, it was said, had arranged Baldwin's demise. Thinking Otho was just an inexperienced lad, the Emperor promoted him to Lord High Marshal of Wall in hopes he would have a more controllable Marshal.
Rather than be intimidated, Otho dived into the role he already knew, and all this time has kept the Darkness at bay.
Now, Otho tries to man the crumbling walls with fewer and fewer men. Imperial corruption and neglect have Otho ranging farther and farther for supplies, and becoming more inventive when it comes to making ends meet.
The few times he is seen outside his office strewn with paperwork, Otho is walking the walls befret of all the trappings of his office. Mostly he is seen at night on the battlements, staring at something, out Beyond the Wall.
Posted by BaronVonJ at 10:56 AM 1 comment:

Labels: Denizens, Wall
Newer Posts Older Posts Home
Subscribe to: Posts (Atom)
All drawings, maps, illustrations, and plans on this site are copyright of the author. Their use without consent is prohibited.