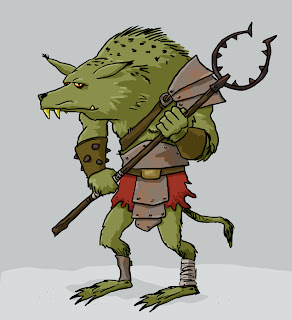 Gnolls. Those hyena-like hunters of the fringe. Many see them as scavengers and cowards.
Gnolls have often been lumped in with many of the other humanoids that prowl the wastes Beyond the Wall. This would be a mistake. Unlike the goblinoid races, which spend much of their time in inter-clan warfare, gnolls packs are highly cooperative. They are are experts at the ambush. Combine this with pack hunting tactics, and you have a highly effective hit and run force. This is often see by civilized races as cowardly, but gnolls just see it as wearing down your opponent for later.
Most of the tactics are used to accumulate slaves. Gnolls are consummate slavers. Those that are not judged strong enough to trade with other packs, or sell to the goblinoids or evil humans, are, of course, eaten. But, this is a last resort, as gnolls are a particularly greedy bunch. It is rumored that demi-human slaves can fetch a high price from the black ships of the Broken Coast.
Beware ye, those forlorn places. Indeed, for many an adventurer the last thing they hear is the eery laughter of the gnoll pack, before they pounce.
Posted by BaronVonJ at 12:27 PM No comments: