Between some rocks, and a hard place

MIss Adventure jumped when she heard the rocks fall behind her. Dust filled the small passage. She took a few steps back, coughing, into the chamber behind her. She was about to run to Gruffydd's aid when she heard a low moan, and sensed movement behind her in the chamber.
When she turned, she saw 4 shapes rise from the floor of the room. There was the clanking of armor, and the low moans again.
"Ahhh, not zombies....."
She was trapped. 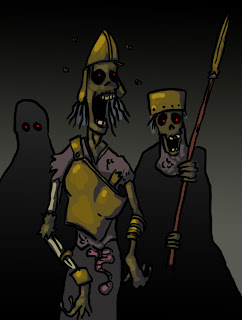 "Aaaaaaaahhhh!" Gruffydd gave a shout as he charged the ghoul. His hammer smashed the creature in the arm. But the ghoul slashed with his claws. The dwarf was scraped, but the ghouls paralyzing toxins had no effect on the sturdy Gruffydd.
Nemon attacked with his mighty blade. The ghoul moved with an unearthly speed. He dodged the blow and wounded Nemon. The warrior soon felt the icy cold overtake him. Gildrid took his place in the fray and was also paralyzed.
While the ghoul was bust with his attackers, Miss Adventure had snuck behind him. She drove her short sword into the thing's back. With a howl it stood straight and flailed at his unseen attacker.
It was then the other finished him with quick hammer blows and arrows.
Gustav quickly went to the aid of his frozen fellows. Calling upon his god, he healed them, but he was exhausted by the feat.
In the ghouls den they found piles of gold. The creature had been waylaying adventurers that entered the cave. He must have been one himself long ago. The party found silver bracers and a heavy key around his neck. Much searching found no lock to match it.
Resyed a bit they moved further down the passage. The way became smaller. Miss Adventure and Gruffydd, being the smallest went first.
The halfling moved through easily enough, but as Gruffydd entered the passage, the ceiling above gave way with a crack. It was if the whole mountain came down on him... 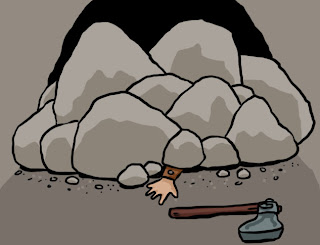