With an enraged Manticore behind them, and a horde of goblins in front, the battle became a desperate affair. Fueled by fear, fear of losing what they had gained, and most of all, fear of death in a dark place, the party fought with reckless courage. Goblins were killed in batches and groups. The party was cut and jabbed, but always they pressed forward. One room, then another, until battered and bruised the last goblin dropped to the floor. But now, they were trapped again. This room ended in no exits. They could already hear the manticore tearing at the door two rooms away.
It wouldn't hold long.
Wounds were bandaged. Weapons were ready. A last stand it would be.
They heard scraping behind them. Gruffydd turned and saw Miss Adventure on the floor, behind a chest scraping at a stone with her short sword. Suddenly, the stone moved! A secret passage.
Nemon was the last to squeeze through the hole in his bulky plate armor.
They lay scattered down a damp, narrow hallway. A small trickle of water gathered in the tunnel's lowest points.
The passage had been dug by hand. It had a strange, unpleasant stink about it. In the distant they heard a "thunk" as the manticore broke into the distant room beyond their secret door. Everyone held their breath. In the silent they heard a low hiss.
Turning, their torches showed a low scaled form.... 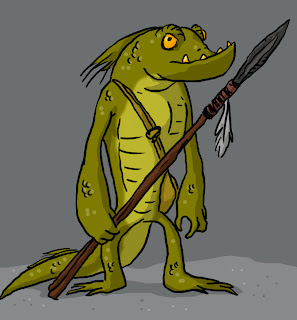