Goblins of the Fellreeve Forest 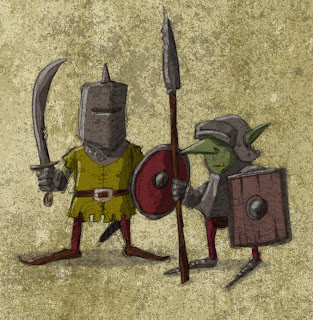 Travelers who make it far enough north Beyond the Wall, might encounter an enormous, dark wood known as the Fellreeve. As if the sheer size wasn't daunting enough (it would take weeks on foot to cross it), most of it's denizens are bent on the demise of said travelers.
Some of the worst creatures stalking the Feelreeve's dark shadows and haunted places are the Goblins. "Goblins?" you scoff. Though a single goblin is not a danger to most seasoned adventurers, they rarely appear in small numbers. In the past, the Empire had a strict policy of extermination when it came to goblins. Left to their own devices, they tended to breed like rats, overrunning many settlements by sheer numbers. The goblins of the Fellreeve have been left alone for decades. There they have grown to staggering numbers.
Being a cantankerous lot, once their numbers grew, the goblins starting fighting. They quickly split into several factions and tribes. Currently, three tribes fight for dominance; the Broken Tooth, the Blood Moon and Crooked Blade tribes.
It is this infighting that has saved Wall from an onslaught of goblin hordes. If a leader should arise, strong enough to unite these warring factions, Wall would certainly shudder under their weight.