"Sounds like good advice", Miss Adventure said.
They turned and left the tree quickly. So quick that they almost ran into the bugbear they lost earlier.
The big creature turned and faced them. "Lunch!"
Gildrid drove his remaining spear into the belly of the bugbear. He grunted and snapped the shaft in two, leaving half still in his belly.
Miss Adventure took the opportunity to stab with her small sword, but missed.
The bugbear slapped her aside and bashed Gildrid with the haft of his halberd. The elf fell on his backside.
As the bugbear finally removed Gildrid's spear from his gut, Miss Adventure used the distraction to sneak behind him. She jumped and drove her sword deep into the creature's back. As he howled in pain, Gildrid stood and drawing his sword finished the Bugbear.
After they had stripped the corpse of it's few useful items, they decided to head back to the Deepen Wood. The two had a half-baked plan to burn the plant controlling the dead with oil and fire.
Once inside the woods again and out of the intense heat, pulled all their remaining oil from their packs. Gildrid lit a torch.
Once again, they entered the clearing. This time five walking corpses emerged from the undergrowth. They had the same sickly yellow flesh. They shambled forward, guided by the plant at the center of the clearing.
Miss Adventure's throw was off. Her oil landed just short of the plant. But it was too late. Gildrid had already thrown the torch. Instead of catching the master on fire, they had caught the slaves. Now, fiery zombies were attacking them... 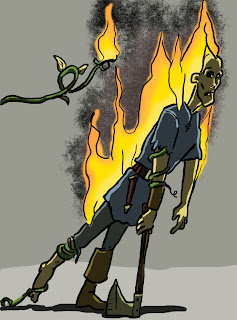 the Quick and the Dead

Dust motes danced like fairies in the soft rays of sunlight that filtered through the broken roof. She awoke. "Oh no. No, no,no..."
Miss Adventure kicked Gildrid in the head.
"Ow! What?" the elf said, angrily.
"Shut up dummy. I think I heard something".
Sure enough, a twig snapped outside. They both peered through the cracks of the ruined hovel they had spent the night in.
Just outside their shack, a large, filthy, yellow furred creature wearing rusted armor trudged about. He, it looked male, poked around the refuse of the abandoned village with a cruel looking polearm. He stopped suddenly. He sniffed the air. Then again.
He turned and gazed with malevolent red eyes at their hiding place. 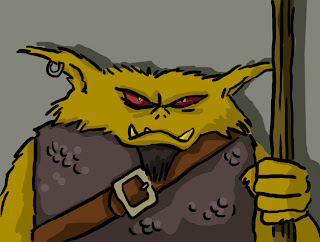 "Boots, quick", Miss Adventure whispered.
While Gildrid donned Miss Adventure magic boots he whispered back. "I can speak Bugbear."
"You think he really wants to talk? He looks hungry".
Just as they had gathered their things, and the halfling once again jumped piggyback on the elf, what was left of door burst open.
"BREAKFAST!" the bugbear howled.
But they were already gone.
Gildrid sprinted down the road, only stopping when they hit a somewhat familiar crossroad.
One track led east to the Deepen Wood. The other led west to a hill beyond.
As Miss Adventure climbed down from Gildrid's back she said, "Was that western trail here before?"
"I don't know," the elf said, "but I'm not ready for the those zombie plant things in the woods."
So, they followed the trail west. It led up a gradual, then sharp slope. When they reached the top, almost out of breath, they found a lone tree.
It was large and ancient. The wood was gnarled and twisted. But instead of leaves, this tree seemed to have sprouted corpses. From almost every branch hung a body in various states of decay. Some wore ancient armor, some simple peasant clothes. The ground below was dead to too. No grass grew.
The whole scene should have reeked of decay and offal, but instead Miss Adventure only smelled fresh baked pie. To Gildrid, it was the pines of his woodland home he smelled.
There was no breeze yet the corpses seemed to blow gently in the wind.
The two adventurers stood, transfixed by the scene. Miss Adventure was almost ready to say something, when the closest hanged man moved.
There was a sick cracking of bones as his head straightened and turned to them. It spoke.
"Leave this place"......

There was a terrible scream as the beast tore into Gildrid's horse. He rose to spear the creature.
"No!" Miss Adventure yelled. "You can't hurt it it. All we can do is run."
After a short backward glance at her terrified pony, Miss Adventure took off, followed by Gildrid. They headed for the road.
"They love to eat Halflings," she said between puffs. Just then the beast let out roar. He was following.
"Stop," Miss Adventure said to Gildrid. "We can't outrun it, but I have a plan."
She pulled her magic boots from her backpack, and handed them to Gildrid. He was confused. She never shared. Never. After another roar from creature he sat upon the trembling ground and put them on. Miss Adventure hopped on his back.
In a cloud of dust they were gone.

They headed north along the Old Trade Road to where they had discovered  an abandoned village in a previous expedition. It had been infested from below with kobolds.
"Let's hope the previous residents haven't returned", the halfling said.
They found a burned out hovel that still had the remains of a roof. The magic boots gave you fantastic speed but took a toll on your body. Gildrid collapsed to the floor exhausted. There was still some night left, so Miss Adventure took the watch while Gildrid slept. Within moments she was fast asleep.
Posted by BaronVonJ at 6:00 AM 3 comments:

Out of the Frying Pan

"RUN!" shouted Miss Adventure.
Dragging the horses behind, the two ran back down the trail. The emerged from the Deepen Wood into the bright sunshine and heat.
"What was that?" asked Gildrid.
"I don't know," replied the halfling, "but I'm pretty sure I know what happened to those trees in a small ravine next to the slowly drying remains of a stream. Gildrid would take the first watch. At some point during the night the ground rumbled. At first he jokingly thought it was simply Miss Adventure's stomach. But, then it happened again. He was in the process of waking her when the ground twenty feet away erupted. The raining dirt pelted the elf and halfling waking Miss Adventure.
Through her bleary eyes she recognized the thing all halflings fear.
"Landshark!" 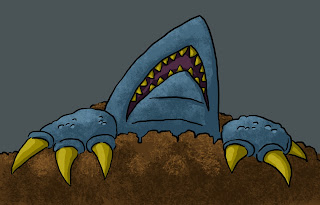 THe Misadventures of Gildrid and Miss Adventure

It was hot. It had been hot for weeks with little rain. Guardians on the Wall cooked in their mail, while the citizens below sweltered in hovels meant for harsh winters.
In the Inn known as Hole, Miss Adventure, a young halfling and her elven friend Gildrid were not only hot, but bored.
"Word is a party went out to the Deepen Wood and never came back." the halfling said. "Then another group went out looking for them. They're missing, too"
The elf looked up from his warm mug of ale, "So?"
"So, their families are offering 50 crowns for information about them. One hundred if we bring them back."
"I've got that much in my pocket now, and bags of gold at Professor Nodd's", the elf replied.
Miss Adventure only glared at him.
Gildrid sighed,"Okay..."
Before they left, the Lord Marshal himself paid them a visit. He warned them not to take the previous routes out of Wall they had used. Instead, avoid the road and cross overland.
This they did. But only a few miles out they were already worn by the heat. Their mounts walked slowly and it was late afternoon before they entered the Deepen Wood.
No birds called from within. The trees were twisted into themselves and covered with old cobwebs. The whole place had a choked, stifling feel to it. The two adventurers found an old animal track into the Wood from the west end. They were forced to dismount.
Only a few strides in they came upon a body half hidden in the undergrowth. It seemed human once, only the skin was taunt against the bones and a weird yellow color. Gildrid used his spear to turn the body over. Miss Adventure gasped. Vines grew out of it's face. Green vines with purple and yellow flowers. Gildrid quickly spun the spear around and lopped the corpse's head off. A puff of yellow dust "poofed" from the body.
Quickly they left the body and headed further in. They came upon a second trail. This one looked as if it had been hacked from the undergrowth. "Uh-no," the halfling said.
They kept on their easterly path. Soon they entered a small clearing. It was dominated by a large tree oak. The oak was being strangled by a huge viney plant. The plant was covered in the same yellow and purple flowers the corpse had.
Before this sight was completely absorbed by the two adventurers, the forest around them moved. From the trees beside them three figures emerged. They had the shuffling gait of the undead, but had dull yellow, parchment thin skin and vines growing out of terrible places. The vines led back to the large plant in the center. The plant was using the bodies like some sick puppet show! 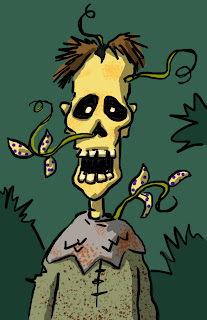 Labels: Gildrid, Misadventure
Newer Posts Older Posts Home
Subscribe to: Posts (Atom)
All drawings, maps, illustrations, and plans on this site are copyright of the author. Their use without consent is prohibited.