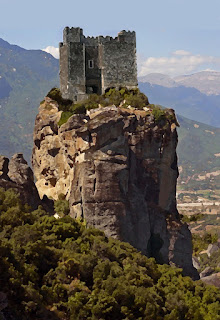 When the Empire made the decision to build the Wall, and abandon those lands to the north, it was imagined at the time there would still be an Imperial presence. Indeed, the lands Beyond the Wall were not immediately swallowed up by the wilderness and the creatures of the dark.
A system of forts were set up as way points for trade and to protect those settlements still out there. Really, they were a way for the Empire to still collect taxes. Soon, those tax collectors started wondering why they were sending the money south, and not just keeping it themselves.
One of these warlords was named Captain Hogram. He held Imperial Fort Number 457. It was one of the most inaccessible  fortresses in the land, situated atop a outcrop in the Stone Hills. Fort # 457, soon became known simply as Hogram's Keep, even though it is more properly a fort.
Once these petty warlords had cemented their place beyond the jurisdiction of the Empire, they started fighting each other. A combination of good location and cunning soon put Hogram at the top of the food chain. Two Imperial expeditions failed to dislodge Hogram. Both sieges ended in disaster for the Empire, and Hogram was left alone by the forces of Man. But not by other forces.
Kelval the Dark, leading what would later be called the First Great Incursion, stormed Hogram's Keep using a combination of magic and three Mountain Giants. Hogram and his bandits were wiped out, but his vast treasure was never found.
It is rumored that treasure still awaits would be adventurers. If they wish to find it, they'll need guts, luck, and a lot of rope.
Posted by BaronVonJ at 8:23 AM 4 comments: