the Glory of the Empire 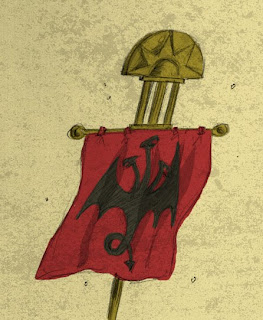 For most people who dwell in Wall, the Empire is a distant idea. Few give it much thought, other than when money is exchanged, and they glance at the Emperor's profile stamped on the coin.
Speaking of Emperors, the current Lord and Protector of the Empire is Theodotius III, a mere lad of eleven years. He came to power in a palace coup, involving his mother Ekaterina, the current regent and real power behind the  Iron Throne. The rumor is the Regent poisoned her brother, the former Emperor, to put her son in imperial purple. This was a double betrayal, as not only did Ekaterina kill her own brother, but the Captain of the Imperial Guard (also known as the Thurnian Guard) was involved. If true, this would be unprecedented. The Thurnian Guard are recruited from the Northern tribes, not only for their ingrained fierce loyalty, but also because it was hoped being foreigners, they would be free of palace intrigues.
Whatever the case, Theodotius sits upon the throne, however precariously.
The imperial standard still flies within its much reduced borders. The Empire is usually represented by three pillars representing the Emperor, the Great Council and the People. Sometimes, a sun, the symbol of Arnor the Greatfather, is shown alone or in concert with other symbols. Lastly, a three headed dragon is used to represent Kelus the first emperor, slayer of the legendary dragon Gorguth.
Posted by BaronVonJ at 8:26 AM No comments: 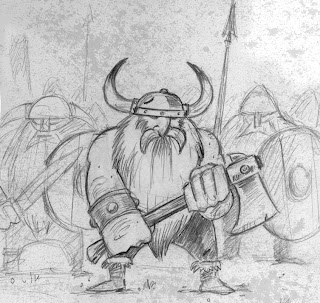 When a vein of Mithril was was discovered in the mountainous Dragon's Teeth, dwarven miners quickly moved in. That small mining community quickly grew, and in time became a Karrak Un Kraggen, or simply the Krag because of the mountain's jagged appearance.
It survived much of the strife caused by the collapse of the Empire, but soon became more isolated by the building of the Wall. Communication became scattered, then suddenly ended after the First Great Incursion.
Several caravans and search parties have gone Beyond the Wall looking for the Krag. It's very location has become lost to Time. But none of the parties has ever returned. In fact, as recently as three months ago, a well armed dwarven caravan left Wall to look for their lost cousins. No word has surfaced of their condition.
In its time, the Krag was a wealthy Dwarfhold. Who knows what riches (or dangers) lie there still. Will adventurers find a still thriving Dwarven city, struggling to survive a hostile world, or a monster infested deathtrap waiting to engulf them?
Posted by BaronVonJ at 7:09 AM 3 comments:

Three days march northeast of Wall, lie the Sundered Hills. The area got its name from the broken appearance of the landscape. It looks like great mountains were bashed to pieces by an immense hammer.
Legend has it, long ago Krolos, the Lord of Battle, went to Vaul, the Maker of Things. Krolos asked Vaul to make him a great war hammer that would be the envy of all who beheld it. Vaul agreed, and labored many days and nights to complete it. When the hammer was done, Krolos stared in wonder at its beauty and might. Vaul asked for payment. Still in awe, Krolos said he would pay anything for it. Vaul asked for the hand of Valena, goddess of love, and sister to Krolos.
Snapped from his trance by these words, Krolos laughed and refused Vaul his payment. The god of the Forge was enraged and snatched back the hammer. The two fought.
Their battle spilled into our world. They wasted the land in their struggle, and thus the Sundered Hills were born.
These days, the Sundered Hills lie Beyond the Wall, and are rumored to be firmly in the hands of the Blue Moon Hobgoblin tribe. The Blue Moons are well organized and disciplined. It is only a matter of time before they attempt a raid on Wall itself.