Ogres of the Black Mountains 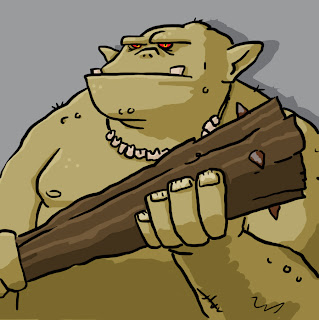 Ogres, those largest of "black bloods" are not, in fact, related to other goblinoid races. They have a distinct language and culture, for lack of a better word.
Many of these solitary creatures live Beyond the Wall, in a small branch of the Widowfangs known as the Black Mountains for its ash covered peaks.
Ogres have a strange place in Imperial history. Befriended early by the tribes that would someday form the Empire, ogres helped shape early Imperial history. Ogres were used as shocktroops and even bodyguards. But, once imperial society had become more "civilized", Ogres became more and more marginalized.
The ogres that haunt the black Mountains now, are descendants of those former Imperial troops forced to settle north of the Empire.
They have become more brutal and barbaric than their ancestors, preying on any passerby, and even their own kind. But, rumor has spread south, of a larger, more powerful force, organizing these brutes into a cohesive force. Ogres may march once again. But this time against the Empire.
Posted by BaronVonJ at 8:21 AM 3 comments: