When she awoke, it was not her cramped, dirty room at the Hole. She lay beside a rushing river in the height of Summer. It was the Brindleshins, the river of her youth. The summer rains had swollen the river, but it was a hot, and often children snuck down to the 'Shins to cool off, despite their parent's warnings.
Today was such a day. She and her younger brother, Roderick, were supposed to be weeding the garden, but the heat had got to them and they dodged Mother to run down to the bank.
But, when they got there, even they were surprised by how swiftly the current was. Her brother paused on a rock jutting out into the dark water. He looked back at her hesitantly, waiting for the okay from his big sister.
Then she saw him. He was on the far bank. A handsome man. She had seen few humans in the seclusion of the Moot, but she knew one when she saw them. He was tall and well dressed. He had a sword on his belt and gold rings. Around his neck hung a single gold key.
He smiled at her.
He beckoned. Not for her, but for her brother. Roderick didn't seem to see the stranger across the river. She knew she had to help this man with whatever he wanted. He seemed so nice. "What's that, you want my brother to swim across to you? He doesn't want to go, but I'll make him, for you. " Just a little push...
This time Miss Adventure woke in the Hole. Screaming.
Posted by BaronVonJ at 10:23 AM 1 comment:

the Lord of Dreams and Eternal Slumber

The servants of Mohr wordlessly took Gildrid along with all the halfling's money. They would keep watch over his body, and plead with their Master for the return of his soul. There was chance, ever so slight, that the fell creature who struck him down, would claim his body. Gildrid could return one of two ways, as himself, or as wight, possessed of a dark malice, but no soul.
That night, Miss Adventure returned to her bed at the Hole. Those who had seen her leave with Gildrid early that morning said nothing to her on her return. Word had travelled fast that their expedition had ended badly. No one, it seemed, wanted their luck to rub off on them.
She slept fitfully. Her dreams were filled with visions of the horror in the crypt, but also of a tall gaunt man in gray robes and a hood. Over the next few nights, she dreamed less of the ancient warrior and more of the man in robes. He appeared carrying a lamp and a sword. Around his neck hung a single key of ancient brass. Each night he drew closer. One night she dreamed he approached on a dark road. In the night sky above, the stars raced too quickly. The man came closer. He smelled of the cold, damp earth. Of his face she could only see a pointed chin jut out from beneath his hood. Grey skin stretched across a painfully thin frame, yet she sense about him a great power. He stooped and leaned to meet her face to face. Through yellowed teeth he spoke, "Remember me, little one?" His voice was like the rustling leaves on an Autumn night.
Miss Adventure's mind raced. Remember him? I think I'd recall someone like him.
"No?" he spoke again, "maybe this will help you..."
He threw back his hood. 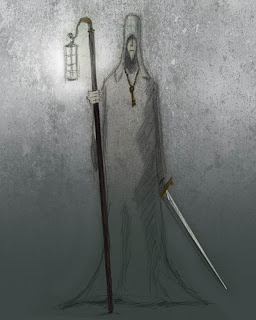 Posted by BaronVonJ at 6:51 AM No comments:

With the creature's rising, the tomb had become cold. Mist was creeping from the floor like grasping, skeletal hands. Gildrid struggled against the ancient warrior's grip, stabbing and slashing at it. Miss Adventure leapt at Goroth, burying a dagger deep in his back. He howled with indignation, and released Gildrid from his grasp so that he could swing with both hands at the little halfling.
All the while Otto merely watched, uncertain what to do. He had been in fights before, but never faced horrors such as this. He backed towards the entrance further, his foot resting on the bottom step.
Gildrid and Miss Adventure traded blows with the fell creature. The strikes that landed seemed to do little or no damage, and all the time the tomb grew colder.
"Give up, little heroes," Goroth rasped, though his lips did not move, "your feeble weapons cannot harm me. Join my dark crusade, and live forever!"
With that shout he drove his arcane blade deep into Gildrid's side. The elf dropped his blade and sunk to the floor. Otto flew up the steps and out into the daylight. 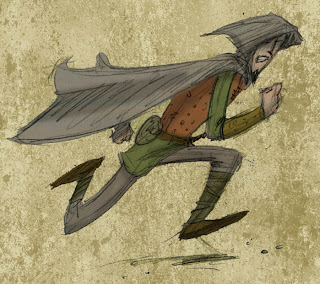 Miss Adventure screamed and threw her torch at the monster. Flames exploded on the thing. Goroth flailed at the flames, his filthy rags feeding the fire. During the distraction, the halfling began dragging the much bigger elf towards, then up, the stairs.
She was out of breath when she reached the daylight, cursing Otto the entire time. Just then, the thief arrived with the horses. He had somehow goaded them against their instincts to approach the tomb. Wordlessly, they hauled Gildrid up and over a saddle. In moments they were riding hard back to Wall. Miss Adventure stole a look over her shoulder before they left the entrance to the tomb. A smoldering Goroth glared from the darkness with coal-hot, burning red eyes.
They reached Wall by nightfall. They would have rode harder, but feared the bouncing might harm the elf more. Gildrid had not stirred during the ride. They could old Sergeant Malloy shaking his head as they road past. He had seen this scene time and again.
They took Gildrid to the Temple of Shayalla, goddess of healing and suffering. The high priestess merely shook her head and said, "he is too far gone for us. We shall weep for him. Maybe you should visit instead, the Temple of Mohr."
Miss Adventure gasped. Mohr was the dread Lord of Death.
Posted by BaronVonJ at 10:18 AM No comments:

Labels: Gildrid, Misadventure, Otto
Newer Posts Older Posts Home
Subscribe to: Posts (Atom)
All drawings, maps, illustrations, and plans on this site are copyright of the author. Their use without consent is prohibited.