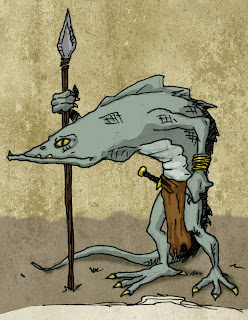 Though usually native to the warmer, southern lands, lizardfolk have been spotted Beyond the Wall. Most sightings have occurred in deep caverns or near volcanic vents. One expedition into the Northern Wastes found a small clan of lizardfolk around one of the magma pools that appear sporadically in that frozen land.
Lizardfolk or lizardman nests are usually run by a dominate male. He can be spotted by his elaborate, brightly colored crest. Duller colored, lesser males sometimes wear crude warpaint in times of battle to intimidate their foes. Females are not normally found outside the nesting area, which is usually the darkest, hottest area of their cave systems.
Lizardfolk are slow to rouse, but once started they are vicious combatants. They carry mostly crude stone weapons, not being metalworkers, but have been known to carry metal weapons, looted from war or traded with other subterranean races. In times of famine or duress, the stronger males have been known to eat their own. They are definitely not above eating captives.
One should not underestimate lizardfolk, as many a would be adventurer have found out. They may seem primitive, but they have managed to survive in what would seem inhospitable climates.
Posted by BaronVonJ at 6:15 AM No comments:

I'm going to pop out of the narrative for moment to thank everyone who has travelled with me Beyond the Wall. This really all started when I discovered the OD&D revolution. The world Beyond the Wall has let me reconnect with old friends, introduce my kids to something that was special to me growing up, reflex some tired old drawing muscles and create a world somewhere just beyond the horizon. How many things let you do that?
Work, house moves and sports schedules have kept me away too long, so hopefully here in the next few weeks, you'll see new adventures from Gildrid, Gruffydd, Gustav, Laramine, Miss Adventure, Nemon and their new friend, Morey.
Until then, thanks for following along.
Posted by BaronVonJ at 9:41 AM 8 comments: 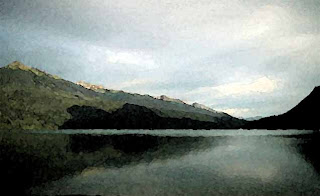 Lake Merr is located to the north and west of Wall. This expansive body of water is both uncharacteristically calm for a lake high in the mountains, and unfathomly deep. A thriving community once existed here, it's people prosperous from the bounty Merr provided, and protected by the surrounding mountains. The people of Lake Merr were envied by all the surrounding tribes. They built great temples with golden statues and market places full of the riches of the world.
All that remains now are the cold ruins of a lost people.
Long ago, it is said, Ul-Merr, great god of the sea fell in love with a simple daughter of a fisherman. She lived in a small hut on shores of the vast Western Ocean. Ul-Merr tried to woo her riches from the sea, treasure from shipwrecks, pearls and other secrets of the sea if she would love him. She spurned his advancements for she knew, like the sea, Ul-Merr was fickle god, and would leave her once he had his prize.
It was only when he promised that the offspring of their union would be a great and powerful being, that she relented.
Sure enough, Ul-Merr soon became tired of her and moved on to another conquest, and the girl gave birth to beautiful son. But, though handsome on the outside, the girl could tell something dark and powerful dwelled inside the child. She fled her village and ran east, deep into the wilderness, finally to rest high in the mountains by a lake.
There, the boy grew. His mother tried her best to raise a normal child, there, alone in the wilderness. But, the boy was powerful, vain and ill tempered, like his father. When a wandering tribe settled on the far bank of the lake, the girl, now an aging woman, tried to relocate to avoid contact with the world and her godlike son. He would have none of it, and in a fit of rage killed his mother.
Thus, the people of Lake Merr would come to know Him. He would make them into a great city, and in return they would worship him, sacrifice to him, and in the end, pay the terrible price.
Posted by BaronVonJ at 6:32 AM 3 comments: