Stumbling in the Dark

Morey tumbled through a web of vines and dead leaves into a dark cave. The sounds of battle still echoed into his new refuge, so the young magic user stumbled further into the cave. In the back, he found a small passage. With one more backwards look towards the cave's mouth, he ran down the tunnel.
After a few strides, he stopped. It was almost too black to see this far into the cave. Morey fumbled with flint, and fished a small bullseye lantern out of his pack. It was dented by his hasty retreat, but still functional. The new light showed a tunnel running roughly north east, carved by some sort of large burrowing creature. Cautiously, he moved forward.
The passage branched off back the way he came. He flashed the lantern down that way, and was greeted my large rodent eyes. A giant rat. Bigger than the ones sometimes found at harvest time back home. 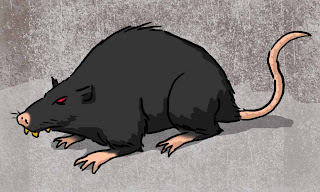 With a startled yelp, Morey hurried up the passage he was on, hoping the rat wouldn't follow. His tunnel ended in a passage running east to west, this one of finished stone. Ahead, he could see a soft light. A quick glance around a doorway revealed a large room. In it stood another group of adventurers!
Posted by BaronVonJ at 11:53 AM 2 comments: 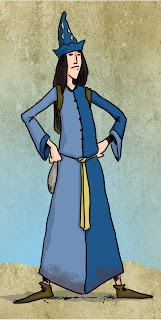 Morey was born a sickly lad. Too weak for the rigors of farm work, he spent his early years helping his mother in the kitchen. Often confined to his bed, he devoured books brought to his Westhold town by passing merchants and tinkers. He dreamed of being a great magus of old like Torvanol or Karus the Black.
When he finally grew out of illness, he was a tall gangly youth, who traded the confines of bed for the vast hills of his father's sheep herds. There, he learned the use of the sling. He could nail a wolf's skull from 100 paces, and often did.
One dismal, rainy afternoon, huddled in his cloak to escape the wet, Morey heard the sheep bleating in terror. This time, it was wolves again. But wolves with goblin riders. Two of them. They hadn't noticed Morey in the dark afternoon rain. They were gleefully massacring sheep, almost it seemed, for fun. Morey's first slingstone knocked the lead wolf dead.
The other turned and rode right at Morey. He fumbled in his sack where he kept the rounded sling stones. The bag was empty! There was a hole in the bottom. The goblin was almost on him, howling with anticipation. Morey flung his arms up to block the blow he new would kill him. It was then the goblin and wolf burst into flames before his eyes. His arms still crackled with eldritch fire.
Terrified, the other goblin took off as fast as he could.
Weeks later, standing before the council of elders, including Sir Fenwick, an old adventurer of some reknown, Morey was proclaimed a right and true magic user, bonded to Empire through sacred oath and sworn to never raise a hand against it. There was not enough money to send him to University for proper training, so as many a poor Hedge Wizard before him, he would gain his training on the road. His mother made him a cloak. She didn't have enough material for a solid color so half of one color, half of the other.
Sir Fenwick himself gave Morey the true conical hat of a wizard. Though, in truth, it looked like he found it in a rubbish bin. It was also Sir Fenwick who pointed towards Wall. The last place in the world left, he said, for true adventure.
Months later, battered by the road and weather, he arrived in Wall. An unimpressive place as he ever saw. That was, until he the Wall itself, dominating the horizon from east to west.
He found a small tavern, the Lazy Troll, and a group of adventurers in need of a wizard's powers. They would leave the next morning. What an adventure! to be in the company of true fighters. Morey had seen road wardens and militia aplenty on the way here, but not true sword carrying warriors for hire.
His four companions were tight lipped about their destination, spies they said, where everywhere. Outside the Wall, they followed a road in terrible disrepair. Occasionally, Morcar, their scout would dismount and look at hoof prints on the road. They passed the largest oak he had ever seen, alone in a filed of stumps. They camped overnight without a fire despite the cold, and the others seemed on edge, watching the horizon. The next morning was full of reading tracks and crossing a great bridge where he swore he heard off tune singing.
The next day found them in steep hills, climbing up and up. They were moving quickly now, apparently close to something. But in a small ravine, they were attacked.
Black arrows rained down on them. Morey's own mount went down quickly, along with one of his companions. Morcar was screaming at the unseen attackers in a strange, gutteral tongue. That's when a shaft pierced his throat and silenced him.
Morey ran blindly. The sounds of battle receded, but his first taste of combat had been more than he bargained for, so on he went until he found a cave.
Posted by BaronVonJ at 1:27 PM No comments:

The undead thing spoke in voice like steel scraping on stone, "Who dares disturb my tomb?".
"Saint Unther himself," Gustav spoke in a whisper, then shouted, "Back to sleep you wretched thing!"
The cleric's hand glowed briefly with righteous fury, then dwindled.
The saint gurgled what must have been a laugh. "You have no power here, young one..."
The creature moved with lightning speed. His rusty longsword bit deep into Gustav's shoulder. The rest of the party sprung to attack, but it was then that four unseen skeletons joined the fray, appearing from the shadows.
Gruffydd's hammer snapped the rusty blade. Laramine's mace destroyed one of the unholy man's shoulders. But, he still kept fighting.
Miss Adventure, Nemon and Gildrid faced the new attackers. It was an unelegant brawl in a dark, tight spot. Almost all the party was hurt in some small way. Saint Unther was still cackling with glee, flailing at the party with dislocated limbs, and biting teeth. It was Nemon who reached in and snagged the the gold dagger that was lodged in the creature's chest. Immediately, the red glow of his eyes disappeared with what seemed like relief. The saint's ravaged skeleton dropped to the floor.
A sealed closet was found containing a few coins and gems, and dusty scrolls. The body of the saint was left where he lay, despite the protests of Gustav.
A short while later the party emerged from a door they had previously passed up, and made their way to the stairs where they had encountered the giant weasel. Should they return to the surface? Should they make their way through the strange opening before them, and down the dark stairs? 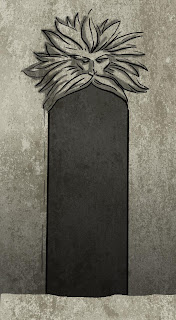 Posted by BaronVonJ at 10:30 AM No comments:

Three of the four skeletons cringed and fell back from the cleric. The fourth rushed forward with a ancient bronze spear. Gruffydd crushed its ribcage with his hammer, then did the same to the skull. Gustav forced the other undead back into alcoves, where they been waiting and guarding for untold years. Cowering in their holes, the ret of the party made quick work of them.
The tomb had a solitary sarcophagus in the center. The tomb was richly carved with reliefs similiar to the frescoes in the hallway. The lid was carved in the shape of the saint himself. Asleep in stone. Nemon and Laramine slowly removed the lid.
Inside, a skeleton in a plain gown rested. When it didn't move, Laramine and Nemon began feeling around the corpse, searching for treasure. Nothing.
All this time, the rest of party waited, ready for something terrible to happen. A trap. A screeching skeleton. But, nothing happened.
Gruffydd was first to notice a small doorway to the west. It was plain and stone. A closer look showed it was sealed in wax. Miss adventure produced a dagger and carefully dug the wax out. A qucik check to see if it was trapped, and with the help of Gruffydd, the door opened.
Cobwebs obscured their view. The Men had to crouch to get inside. A single torch was lit to burn away the webs and thrown into the room to give light for the members of the party without night vision.
Against the far wall a single figure stood, then stirred. Dressed in a dark, filthy rag of robe, a lone rotten corpse moved to seperate itself from the cobwebs and the shadows. It carried a long rusting sword. It's eyes glowed red with what seemd to be mailce. In the light of the torch, a golden dagger gleamed, protruding from the creature's chest.

Labels: Gildrid, Gruffydd, Gustav, Laramine, Misadventure, Nemon
Newer Posts Older Posts Home
Subscribe to: Posts (Atom)
All drawings, maps, illustrations, and plans on this site are copyright of the author. Their use without consent is prohibited.