One of the bravest in the group.
Posted by BaronVonJ at 12:00 PM No comments:

Evolution of a Character: Miss Adventure 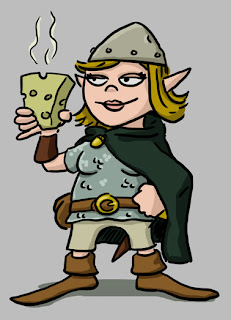 Looking at her, Miss Adventure seems very much unchanged since she entered Wall. Unlike most of her companions, she hasn't spent much on the latest fashions or armor. She has squirrled away most of her money. Her only weakness seems to be fine cheeses.
Most of her equipment is watch she started with except for her very "un-halfling" like boots. Where most of her kin go barefoot, she has kept the very special boots she found in the dark depths. Indeed, she has collected many of the overlooked, seemingly useless items, that turn out priceless.
Posted by BaronVonJ at 8:46 AM No comments:

Evolution of a Character: Gildrid

Gildrid at 2nd Level.
Posted by BaronVonJ at 12:23 PM No comments:

They came in the night. Henchmen of their ilk rarely conduct their sort of business in the light of the day.
Alabazium had known on some level they would come. He'd known since he came to Wall. He thought his first foray into the adventuring life would pay off his debts. But that expedition had brought little gold, and many nightmares of cannibals in the dark.
Since then, he had wandered about Wall, trying odd jobs. His magical abilities barred him from most honest work, and attracted the wrong sorts wanting him for dishonest work.
A terrible winter spent on the streets of Wall, had lowered his standards. It's amazing what an empty stomach will make you capable of.
It was a simple job. All Alabazium had to do was loosen a few magical wards on a merchant's shop. The others would do the actual snatch and grab. In and out.
It all went remarkably well. His share would get him a food for a week and small room out of the cold. It even had a view of the wall.
It was on the third night, in his tiny room above the inn that they came. The boot to the head woke him. The room spinning, he tried to focus on the bearded man holding him firmly to the floor.
"Where's the money, Az?", he said grinding his heel further into the back of the magician's neck.
Alabazium managed a croaking, "In the bag. It's all I have."
There was shuffling noise as the tall one rummaged through Alabazium's bag.
"That ain't gonna even cover our expenses from the Border Kingdoms. By the way, nice trick joining those circus folks. Six weeks was it? You'd think they'd have more loyalty. They gave you up for two Crowns."
No doubt, Alabazium thought, they were still a bit mad over his incident with the lion. "I have an amulet. It's worth a king's ransom!"
"A king's ransom, huh?" The bearded one said."Judging by the rags your wearing, I doubt it. Let me see it anyway".
Alabaium felt the weight release from his back. He got up. A quick glance around showed four large men, filling his tiny room. The normally chilly room was warm with 5 men crammed in it. Two had crossbows trained on him.
"No funny stuff, or you'll get two in the chest. You may be worth more alive to Lurtz, but dead'll still pay us handsomely."
The skinny magician crawled over to his simple bed. Reaching under his pillow, he found the amulet. The crossbowmen were aiming at his head. Clutching the cold necklace in his hand, bead of sweat rolled down his forehead.
"Terrazahh!"
There was a flash of light. Alabazium went from the warm, musky room to freezing air of the Wall. The teleportation amulet had worked! He almost laughed, then he realized he was scant yards from his room. He was standing on the Wall, almost eye level with his window. About the time he realized this, so did the thugs.
Glass shattered as two crossbow bolts whizzed past Alabazium's head. He turned and ran down the length of the Wall, into the night. 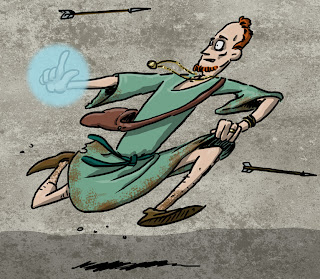 Sidenote: One of our gaming crew has left us to return home to the magical land of Ohio. Alabazium was his PC. I thought it on;y fitting we send him out with a story...
Posted by BaronVonJ at 9:44 AM 5 comments:

Labels: Alabazium
Newer Posts Older Posts Home
Subscribe to: Posts (Atom)
All drawings, maps, illustrations, and plans on this site are copyright of the author. Their use without consent is prohibited.