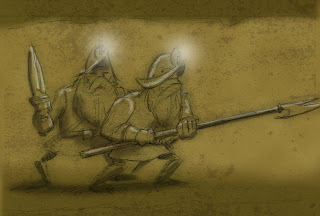 For centuries, the Wall has kept the dark things of the barbaric North at bay. Its seemingly endless span is patrolled by the Guardians above, and its border is protected below, by the Underguard.
Dark forces have tried many times to circumvent the Wall by attempting to go around it, or hitting weak spots. They have also tried tunneling under. Each threat has been stopped by the stalwart forces of the Underguard.
The ranks of the Underguard are filled mostly by dwarves, with the occasional gnome, halfling or shorter human. Their life is just as harsh and under-appreciated as the Guardians that patrol above. The Underguard's life spans have been shortened by the sometimes brutal subterranean environment. A tragic fact given the normally longer life that demi-humans have over Man.
There is an almost endless maze of tunnels beneath the Wall, and earning all of them would take a lifetime. There is a cadre of mappers that do just that.
Most of time, however, the Underguard can be found at listening posts spaced inside the tunnels. A system of mechanisms, both magic and mundane, constantly monitor for the telltale sound of scratches and digging that proceeds an incursion.
Few above know of the small battles that happen more and more frequently below their feet. Not too long ago, a marauding Bullette found its way into the tunnels. Three Underguard died bringing it down. The harsh reality, is there are attacks, and fewer defenders each year. Who wants such a unforgiving job? How many Underguard die, alone in the dark?
Posted by BaronVonJ at 12:27 PM