And in the depths, they worshipped a dark god

There was surprisingly little hesitation. Everyone started harvesting mushrooms. Most of the party was knee deep in beetle dung.
"Hey Dimzad," Guthix said, "these mushrooms might be similar to the healing potions. Or they could kill you."
The dwarf started crushing a few mushrooms into a blue glowing paste. He stopped, looked at the others and began to vigorously rub it into his wounds. It tingled, then burned like dragon fire, but it seemed to have staunched the blood flow.
"Try eating one," Miss Adventure said with a smirk on her face. It was no secret that she found the dwarf a loutish, brainless oaf. "Go ahead. I'm sure it will be fine".
Everyone looked away, sure Dimzad was about to breath his last. Gruffydd just shook his head and went back to harvesting.
Miss Adventure had climbed to the top of the dung heap. She spotted a small doorway, mostly covered by the pile.  "Fellas, I found a way out."
They all clamored over the top. All except Dimzad. He still stood in the middle of the room, staring at the blue mushroom. Gruffydd yelled at him. "Well? You gonna eat it or not?"
Dimzad sighed. He popped the glowing fungus in his mouth. It tasted awful. His stomach burned. The room spun. He dropped to his knees and wretched up his lunch. It glowed blue on the cavern floor.
But, amazingly he felt better.
The dwarf caught up to the rest of group huddled at the end of a stone passage. The end of the passage held a door that was made of wood, but disguised as the same stone around it. From the other side came otherworldly chanting.
"Great," Gruffydd whispered. "They probably grow these mushrooms, get high as shit, and do a kinds of crazy stuff I don't want to know behind this door".
He moved the door a crack a looked inside. Unlike the rest of the caverns, this one was lit. Candles and torches burned about the room, illuminating a thing of nightmares.
It was a large statue. It had many arms and mouths, and a great bloated body. It sat atop hundreds of bones, and bones littered the filthy floor. The whole statue was drenched in gore. Blood spattered every surface, but in the center was a large ruby glistening in the fire light. Surely this was god of the morlocks. A cannibal god. 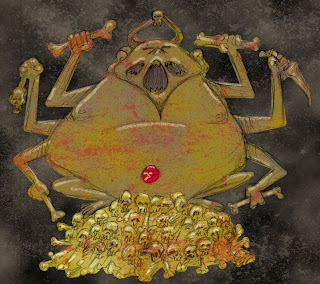 Seated in front of the horrific statue was a large morlock. Unlike the rest, this one wore rudimentary clothes. A dirty scarp of red blanket served as his priestly robes. He seemed lost in his chanting, rocking back and forth.
Gildrid pulled an arrow from his quiver and set it to bow. He drew back and took aim on the priest.
Gruffydd whispered in his ear. "Try not to miss this time".
Posted by BaronVonJ at 6:14 AM