THWANK! The arrow flew straight and true. With a "Thud" it sank into the morlock priest's back. He howled and stood up. A quick look around and he had spotted his assailants. There was a commotion from the north and two huge guards appeared. These were the biggest morlocks yet. They wore ghastly breastplates and helmets made from bones. A few gutteral orders from the priest and they charged the hidden door.
"Shut it!, Shut it!", Gruffydd yelped.
The door slammed shut just as two crude spears smashed into it.
"What now?" Nemon asked.
"We open the door. Then fight them one on one." Gruffydd said. "I'll go first". 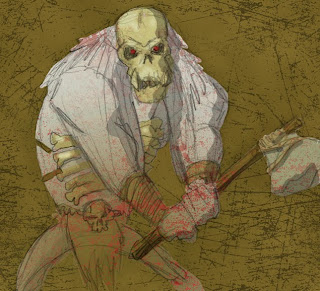 Mellion quickly slid the door open. Gruffydd slammed his warhammer into the skull helmet of the first guard, who fell backwards into the other. Abandoning the plan, the rest of the party poured through the opening and began hacking at the guards. Nemon's thick plate deflected the primitive morlock weapons and he skillfully beheaded one of the guards. The elves, Mellion and Gildrid cornered the other guard and brought him down.
The priest stood near the bloody idol hissing at the slowly approaching Miss Adventure, She had her poisoned dagger behind her back. Gruffydd gave a war cry and charged him. His attention drawn to the approaching dwarf, he didn't see the halfling until it was too late. She sprang, and drove the dagger hilt deep into the shaman. He howled again then fell silent against his bloody god.
"That jewel is mine!" Dimzad stomped up to the idol. He clammered up the pile of bones. He quickly became covered in blood. After a few precarious moments, he balanced himself, drew a dagger and began to pry the great ruby loose.
There was groan from the belly of the beast. "Ah-oh." Dimzad said.
A great blast shot from the central mouth of the statue. It was colder than the winds off the northern wastes. It hit Dimzad square in the face. He fell, covered in ice to floor below. The others came to his aid. Gruffydd cracked the ice from his face. Unfortunately, it took what was left of his beard, too. Dimzad was unconscious. Again.
Nemon sighed, and took the last vial of Verena's tears from his pack. He forced it down the dwarf's throat. Dimzad coughed, sputtered and regained his senses.
Nemon picked up his shield and climbed the idol. Bracing his shield between the mouth and himself, Nemon began to pry at the jewel.
Once again it belched forth cold. His shield whined and cracked under the freezing wind. At last, it popped loose. The cold stopped. Nemon dropped his shield and it shattered into a hundred pieces.
Posted by BaronVonJ at 4:39 AM