Interlude: Life on the Wall 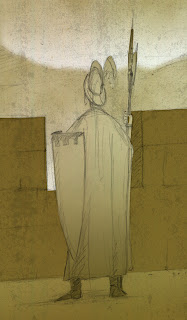 Living on the very edge of of civilization can be hard. Living on the Wall is harder. The climate is harsh, ranging from the numbing cold blowing in from the Frozen Wastes to the blistering heat of the summer. Now, throw in the constant threat of being overrun by hordes of bloodthirsty monsters and you begin to understand why life on the Wall isn't for everyone.
But, the life of a Guardian has some benefits, full Imperial citizenship for one. In return for 25 years service, a retired Guardian can expect a pension, and a small plot of land, usually just south of the Wall.
While in service he will get a steady, if meager pay.
The Wall itself stretches for leagues upon leagues, interspersed with mile forts along its length. These forts become little fortresses in and of themselves, with villages springing up to service them. Some Guardians spend their whole lives here, never seeing the city of Wall, or any place within the empire. The post of Guardian has become hereditary with a father's post passing to his son. It can be a solitary life, with long stretches of the Wall abandoned and crumbling in places. Each generations has fewer and fewer Guardians. More and more would-be recruits head to the more prosperous south, in hopes of a better future than walking a seemingly endless parapet.
That hasn't stopped men from joining though, as many a desperate drifter has become a legend. For instance, the great Cerdic, who snatched back an imperial standard from the claws of a great War Troll at the siege of 1346,  during the Third Incursion. Then there's Osbert the Slayer, who single handedly slew a great wyrm, but died in the process. Only his hand was found. Or there's Captain Martel, who served valiantly for 20 years, then one day disappeared into vastness Beyond the Wall never to return.
All these men and more have their names listed on a obelisk at the center of Wall. Many men will brave the weather, the danger, and the sometimes lonely life of a Guardian, simply to have their name someday etched on that monument.
Posted by BaronVonJ at 12:45 PM