The sword bit deep into the wood, missing the eyeslit by inches. There was a hoarse cry from behind the door. The lever would be pulled, the alarm would be raised, filling the tomb with hungry Morlocks!
"Coming through!" Nemor charged from nowhere and put the full weight of himself and his armor into the door. The hinges gave and the whole door smashed inward on the morlock guard within. There was a wheeze and a gurgle from under the door. Gildrid pried his sword free, then plunged into through the eyeslit.
Everyone gave a collective sigh of relief. There were no noises of alarm, no horde crashing in from the dark to eat them.
Guthix walked up to a sheepish looking Gildrid, "Smooth. Real smooth."
"Least I didn't waste my only spell for the day!" Gildrid retorted.
After a quick scan of the room, the party moved to the intersection. Half went north, half went south. The northern passage ended in a carved out section, recently used to house the great ape. All they found was a dirty nest of straw and rags.
The southern passage simply ended. No door or steps. The dwarves poured over the hallway, looking for any secret doors or traps. There was definitely a sliding door at the end of the passage, but no way to trigger it. Nemon walked back to the guard room. Close examination of the lever inside showed that there were three marks on it. It was currently in the top position. They knew the lowest position set off the alarm. So he took a breath, then slid it to the middle position.
CLANK! Shoomp! "Hey! Nemon! It worked", Miss Adventure said.
Indeed. Where the passage had ended before, was now a dark flight of stairs heading down. These steps were different from earlier ones. They were narrower, and construction was newer and less skilled.
They turned back on themselves and ended at a landing.
Unfortunately, the torches alerted the four morlock guards at the bottom.
They were big brutes. Yellow fanged and their nearly white skin filthy. They gave a low growl and charged, brandishing strange long hafted pole-arms. Nemon threw a dagger and missed wildly. The rest leapt forward to meet the guards. There was mad swirling of weapons. Dimzad and Gildrid were heavily wounded. Mellion got a thump on the head, while Gruffydd only suffered  a few scratches. Three morlocks dropped lifeless to the floor. The fourth made a break for a hallway ending in two reinforced doors. It surely led to more morlocks.
Thunk! An arrow pinned him, dead to the doors. Miss Adventure smiled, and put away her bow.
Before anyone could take stock of the situation, the ground vibrated, and all attention moved to the lumbering shape emerging from a huge cavern to the south.
A giant beetle. A giant carnivorous beetle. 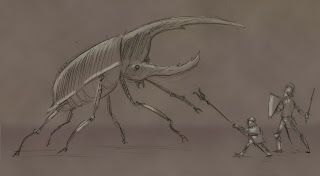 Posted by BaronVonJ at 6:59 AM