For over six generations, the name Calavetti has been synonymous with fine arms and armor. They have been armorers to kings and the god of war himself, if their claims be accurate. Indeed, for a time the weapons were of such a fine quality, they were denied export by imperial decree.
The Calavetti's had fame, riches and the ear of the Emperor. All that changed when Donatello Calavetti was implemented in a plot to assassinate one of the emperor's favorite nephews. The charges were baseless, but the Calavetti name was forever tarnished among the nobility, and without their favor, the family floundered.
Enter Giovani and Nicoli Calavetti. These grandsons of Donatello pulled up shop in the south and moved to Wall. Ever since their arrival they have been providing quality equipment to the military and adventurers alike. "Good Steel at a Good Price" is their motto, and they stick behind every weapon or piece of armor. If you break a sword, they replace it, no questions asked. The ringing sound of hammers, echoes from their shop every day, where at least one of the brothers is working while the other dithers over prices in the front of store. (or they're apologizing to a local farmer over indiscretions with his daughter). 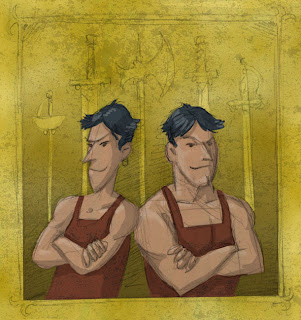 The Calavettis have earned people's respect in this harsh part of the world. When all else fails, you at least know the Calavetti steel in your hands, won't let you down.
Posted by BaronVonJ at 12:00 PM