"I think I figured out what the big sticks are for!", Miss Adventure yelled.
The beetle was shiny, black and enormous. It's mandibles clacked and sputtered, in anticipation of a meal.
Dimzad and Gildrid charged, despite being already wounded. The beast knocked them aside with ease. Dimzad slumped to the floor unconscious. Miss Adventure grabbed a discarded morlock pole-arm and began to distract the giant insect. Nemon threw a dagger and missed, again. He then grabbed another strange pike and helped the halfling. Gruffydd slammed his great warhammer into the beast's carapace, there was an audible "crack". Mellion went in swinging.
It began a dance of sorts. The beetle would lunge ahead, whack a party member, then be forced back by Miss Adevture and Nemon wielding pikes. Finally, the creature was cornered, it's back to a small passage.
Mellion saw an opening. He dashed under the belly of the beast thrust his sword in deep. He barely managed to dive out of the way as the beetle crashed to the ground.
The party looked around. They were all bruised or damaged in some way. Dimzad was out, almost dead.
Before the group had left Wall, Gruffydd and Nemon had visited the Temple of Verena. A few donations had granted them five vials of "Verena's Tears". These magic potions, from the goddess of healing, were known to heal any wound or sickness. After using all but one, most of the party was invigorated. All except Dimzad. The battered dwarf had simply taken too much damage. He was alive, but barely walking.
"Look down here!" It was the ever inquisitive Mellion. He was peering down a roughly hewn passage to the south. It wasn't big enough for the beetle to have come through and there was a earthy smell to the place. And an unearthly blue glow.
Slowly, the party moved down the passage. It was muddy and slick, with a gentle downward slope. There were also two parallel furrows cut into the floor. After a few twists and turns it opened into a small cavern.
Piled against the wall was a large pile of what could only be beetle dung. And growing in masses from it, were hundreds of blue, glowing mushrooms. 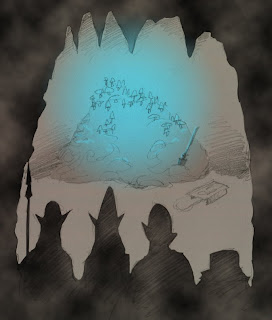 Posted by BaronVonJ at 6:55 AM