back to the Tomb

The rest of group could see Dimzad's flailing legs and and muffled cries. After a few moments they decided to grab hold of his legs and dragged him out. He was battered and bloody, and missing a large chunk of his beard. He slumped, degraded into the mud. "We can't get at tose critters till we get past that thing," Gildrid observed. Looking down the dark hole, he could still see it, waiting to pounce, but just out range.
"Here!", Nemon trudged up, and unceremoniously dropped a bloated corpse from up the creek in front of the hole. "That outta get him out."
Sure enough, after a few minutes, the giant crayfish emerged to investigate the bounty at its door. Wham! Dimzad slammed his ax into the creatures head, while Gildrid pinned it with an arrow. It squirmed, then went limp.
"Alright," said Mellion, "who's going in?" Everyone tuned to look at Miss Adventure who was absentmindedly eating a pear. She groaned, pulled out her dagger and climbed in.
The tunnel went in about 15 feet, then dropped quickly straight down. She peered down into the hole. She could here screeches and growls, the 3 pairs of eyes appeared below. A shriek. Then a lot of eyes coming up toward her.
Miss Adventure turned and scurried out the hole. Splash! "They're right behind me!"
But, instead of following, the kobolds began collapsing the tunnel. A few arrows and bolts were shot down the tunnel, but whether they hit or missed was unknown.
Muddy and empty handed, the party returned up creek to see what Gruffydd had recovered. It turned out to be little. There were a few coins, some daggers, which Nemon took after he assured them that he was quite the knife thrower, and some leather belts and bags. The corpses, both horse and human, were riddled with black fletched arrows. No one knew quite what to make of it. They began the hike up the hill to the tomb. 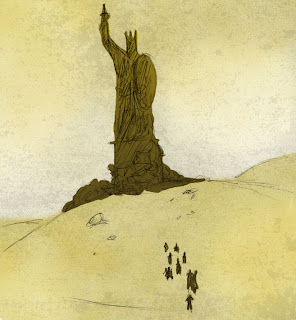 The tomb was much as they left it, although someone had cover the entrance up again, hiding it with vines. The door slid much easier this time.
Dimzad looked distressed, not only because he was bleeding and missing half a beard, but because he gained nothing in return. "What am I going to do with Bob while we're inside?"
Everyone looked at each other, then at Dimzad. "Who's Bob?", they said.
"The goat," Dimzad replied. "I can't leave him out here. "I know, I'll take him with us!"
He picked up the goat, who was not happy about being picked up, and pushed him through the entrance.
SHOOMP!  A group of 4 sharpened stakes hammered down from just inside the entrance, impaling the goat, and pinning it to the floor.
"BAAAAWWWWBBBB!!!!"
Posted by BaronVonJ at 11:03 AM