Legends, whether whispered over a mug of ale in the dark corner of an inn, or sung by troubadours at court, surround Wall and its environs. Some legends grow over time, while others fade or change. Few stay the same. One of those few legends that remain unchanged, is the Legend of the Three.
The Three first appeared over two hundred years ago. One of the last large scale military patrols left to go Beyond the Wall. It was supposed to be a raid against an orc tribe that had been plundering the last few settlements north of Wall. They found the orcs, but they had already been punished. The entire tribe had been slaughtered, and standing amidst the carnage were three figures.
All three wore heavy armor, and appeared to be human, but their helmets obscured their faces. One wore a helmet in the shape of a wolf, another a ram, and the last a stag or hart. The Wolf carried an ax with its crescent moon blades emerging from a howling wolf's head. The Ram carried a massive warhammer shaped like a ram's head. The Hart, a huge bastard sword.
Before the Captain could thank the Three for making quick work of the orcs, they attacked the patrol. They fought with the speed and strength of the champions of old. Only the standard bearer survived by hiding beneath the rapidly growing pile of dead. He alone returned to Wall to tell his strange tale.
Years would pass before the Three were spotted again. Tomb raiders and scouts would return with tales of the Three. Sometimes they would help parties, sometimes they would attack. Sometimes they were sighted alone, and sometimes together. There seemed no pattern to their actions, no cause.
Only one man ever spoke with them.
A group of thieves had escaped Wall and headed north to hide out for awhile. A wealthy merchant put up a reward for their return along with the stolen jewels they took. A mercenary named Toth, a grizzled soldier from the Widowfang Mountains took the job. He tracked them for two days, and on the second moonless night found their camp. They lay asleep next to a fire. He snuck up silently, but it was a trap. The sleeping blankets were empty. The five thieves jumped Toth and subdued him. The thieves were just about to finish him off when a rider burst from the tree line.
The horseman wore a wolf's head helmet. He slaughtered the bandits single handedly with his great axe. When his work was done, he rode up before Toth, and simply stared at him.
Toth, not knowing what to say, simple said "Thanks" and "What is your name sir?"
The rider replied, "I am the Wolf".
Toth swallowed. "Whom do you serve, good sir?"
"I serve He Who Waits". And the Wolf turned his horse and departed.
After finding the jewels, Toth returned to Wall. With his reward and his strange tale, he was the toast of all the finest drinking establishments. But it was not to last. A few weeks later, Toth went Beyond the Wall again. This time never to return.
Scholars have spilled much ink on the Legend of the Three. Some believe they must be undead because of the length of sightings. Other believe they are different people, a role passed on over the ages.
Whatever their origin, their true motives are yet to be uncovered. 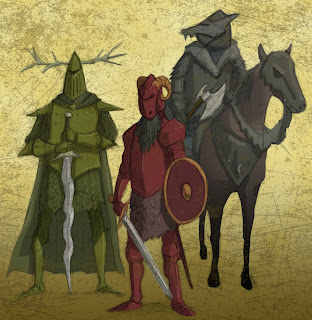