Interlude: Peoples Beyond the Wall

When the Empire collapsed, and the Wall was built, some humans and demi-humans chose for various reasons, to stay beyond it's safety. Most of the communities and towns were quickly destroyed in the monster incursions that followed. Others were consumed by wars of dominance in the lands free of Empire's grasp.
Some went underground. They survived for a time, but over the decades became no better than the creatures they fought above the surface.
The human survivors were the worst. Shunning the light, they devolved into degenerate versions of themselves. As food became scarce, they began to pray on others, turning into cannibals. Stories reached Wall of roving packs of pale humans that hunted at night. They had created vast communities underground, in old tombs and monster warrens. They were given a name. Morlocks. 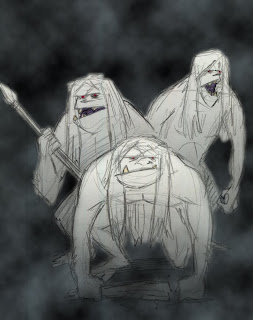 Though appearing as dirty albino cavemen, Morlocks can be quite cunning, setting traps for would be invaders. Anyone foolish enough to enter one of their lairs, is often taken alive for sacrifice to their blood drenched god. Their eyesight might be poor, but their sense of smell is excellent.
Morlocks are vicious predators, and should not be under estimated.
Rumor has it, morlock communities in the north are being pushed closer to Wall by invaders far darker and malign.
Posted by BaronVonJ at 9:11 AM