The body was that of a man. Stripped, and staked to the ground. He had been eviscerated, and his guts left strewn about. What was left of them. The vultures and wolves had done their work so it was hard to tell how long he'd been there in the middle of the road.
Strangest of all was the hood on his head, and the noose around his neck. The party had seen it before, on bandits that prowled Beyond the Wall. The Brotherhood of the Black Hood.
Of all the petty kingdoms this side of Wall, they were the most dangerous.
"Whatever could it mean?" The question came from a nervous looking Klaus, who was dabbing sweat from his forehead and curl.
Lars said loudly, "Just bandit nonsense. Get to moving!"
Nonsense or not, he looked shaken. The ever present Lud just sat and picked flowers.
Gruffydd stopped Lars as he was mounting up. "We've seen this thing beofre."
Lars stopped with one foot in the stirrup and looked down at the dwarf. "Yeah?"
"Could be inter tribal warfare between the bandit groups. Not something we want to get in the middle of."
Lars paused, a foul look on his face. "Wall's that way," he hooked a thumb south. "Want out? Start riding. Otherwise, get going."
Gruffydd spoke up again. "We have a friend that lives close".
Lars looked around and the emptiness. "Out here? What kind of friend?"
"Close. We'll ask some questions, catch up later."
"I doubt it", Lars said as he swung his horse about. "Lud! Quick pickin' at that body and move along. Got a long day ahead!"
As the wagons pulled away, the party rode slightly northeast to a valley. The plains around the valley were dry. The grass barely hanging on to life. But in the valley, the grass was green. The trees were tall and full of leaves. They passed old rusty logging equipment and ancient stumps, until finally entering the cool of woods. One last look over his shoulder, and Gruffydd spied Lars watching from far off.
A few minutes later they entered a familiar clearing. A small brook trickled between twisted roots. A slight breeze moved the leaves.
The party was not alone.
From behind a great oak, a beautiful woman appeared. At first, she could be mistaken for an elf, but her pupiless eyes, and green skin tone betrayed her.
Miss Adventure spoke.
"Newly". 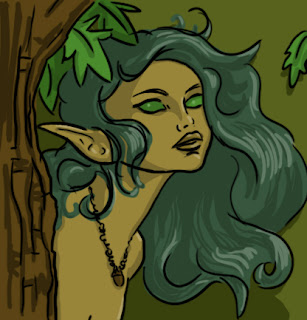 Posted by BaronVonJ at 2:13 PM