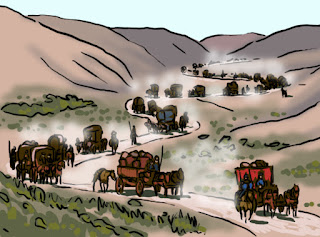 Indeed, they did leave in the morning, and were blessed by a cool breeze. The blessing did not last, however. Arnor was merciless this day.
The party, having their own mounts, were positioned as outriders, They were to be used as scouts and herders for the massive flocks of sheep, and herds of cattle.
The wagon train stretched for a league at least. And with it, the massive dust clouds. Besides clouds of dust, were clouds of biting flies.
They were, safe to say, miserable.
"I don't like the the attention this massive dust cloud is going to attract," Nemon said through cloth he wrapped around his mouth. "We're used to traveling light. Moving quickly."
Gruffydd, who rode beside him on a pony, grunted agreement. "Yes, but who'd attack a caravan this large. You'd need an army."
Nemon, shaded his eyes and looked up in the cloudless sky. "Or a dragon. Or a giant..."
Hours passed.
Arnor still punished them.
Then, the caravan stopped.
Gruffydd, and the others rode to the front. A group of riders had dismounted along with Von Aldensburg and his bodyguards, sweating in their heavy armor.
They all were staring at the ground.
In the middle of the road was a body.
Posted by BaronVonJ at 2:24 PM