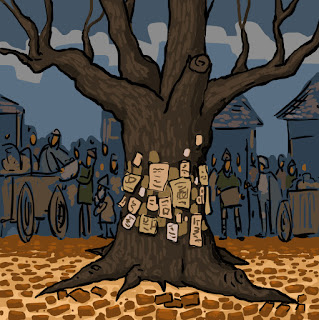 At some point during the afternoon, it had rained. This only added to miserable heat outside. The weather was only one strange aspect of life in Wall. Despite being a very northernly place, it experienced some of the largest swings in temperate in all the crumbling Empire. Winters were frigid to the point of being painful, fall and spring were wet, and summers, like this one were bristeringly hot.
Now, thanks to the rain, it was also chokingly muggy.
Gruffydd headed towards the market square. When one was searching for work, one needed not to look any further than the Market Tree.
Like city name itself, names in Wall tended to be simple and to the point.
The Market Tree stood at the center of the bustling market square. It was large and of indeterminate age. It had always been here. It's base was covered in fliers, posters and notices of all sizes and shapes. It had cracked and tossed aside the surrounding paving cobbles over the years. All the rusty nails, holes and scratches left the Tree in a sickly looking state. Devoid of foliage, it refused to die.
Gruffyd made his way through the crowd and looked over the Tree. Amid the notices for lost dogs, laborer jobs, proclamations of faith and wanted posters was a simple job listing:
"Calling All Stout Hearted Adventurers! The Merchant Company of Klaus Von Aldensburg seeks Courageous Types to escort a Caravan North, Beyond the Wall. Please make Inquiries at the Inn of the Dragon and the Maid."
Gruffydd stroked his beard once, twice .... and snatched the paper from the Tree.