Gruffydd found himself, as he often did these days, at the sign of Skull and Crown. It had not been his usual haunt, but had become it as of late, being off the beaten path and away from the others.
Inside the tavern the air was stale and stifling. The dwarf stared deep into to his barely passable mug of ale .
I 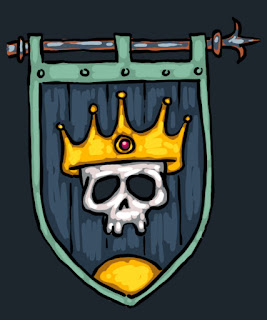 t seemed everyone in his little party had found other things to do. Other places to go.
Gustav to his studies, Nemon to his places of leisure, Gildrid on side adventures that frequently left him in the hands of the Healers at the Temple of Shealla. And Miss Aventure? Gods only know where she goes.
But they all had one thing in common. Their once vast wealth was dwindling.
They would need another job, and soon. If not for the money, then to keep their sanity.
Gruffydd finished the ale in one big gulp, tossed a copper on the bar, and stepped out into the heat of the day.
Posted by BaronVonJ at 11:42 AM