It took most of the afternoon to round everyone up. Gruffydd criss-crossed most of Wall, digging his companions out of their various haunts.
The sun was setting when they reached the crowded courtyard of the Dragon and the Maid. If Wall could be said to have a swanky establishment, the Dragon and the Maid would be it. It wasn't quite as run down as most inns in Wall. The paint was somewhat fresh. The sheets were changed at least once a week, and the food was as fresh as fresh can be when you're leagues from anywhere.
The courtyard was packed was high sided wagons stuffed with bags, boxes and trunks. It was a little like a maze for the smaller, non human members of the party.
All about people bustled, packing and rearranging gear. The smell of sweat and animal dung filled the air. At the center of the chaos sat a very calm, slim man dressed in leathers, cleaning his fingernails.
Beside him stood a giant of a man. His clothes were slightly better than a beggars. He was filthy with a dull, far off stare. 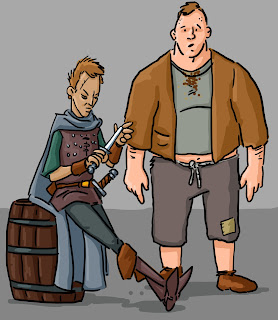 As the party approached, the slim man spoke while never taking his eyes from his work, "You must be looking for work."
Gruffydd grunted.
Still not looking up, "Have any experience Beyond the Wall?"
Nemon let out a burst of laughter, while Miss Adventure sniggered.
The slim man finally looked up, wiping his nails on his leather jerkin.
"Well..." he sighed," I'm Lars. This is Lud"he said as he pointed with his knife. Lud was too busy swatting at flies to notice his introduction.
Shaking his head, Lars said, "His Majesty, Von Aldensburg has final say, but I'm the head of this circus. So as far as I'm concerned, welcome to Glorious Company of Klaus Von Aldensburg." He finished this with a bow.
"Come this way, to meet our brave leader..."

Posted by BaronVonJ at 9:07 AM