Miss Adventure ran to meet the Dryad, arms open, but Newly stepped back unsure, "are you my friends?"
Conversations with Newly were always odd. She perceived time differently. She aged differently as well. She appeared as a child in the Spring, and woman of middle age in the Fall, an old crone in Winter and as a woman in full bloom in Summer, like now.
Her eyes widened, "You ARE my friends" and embraced the halfling.
Nemon spoke to Gruffyd under his breath, never taking eyes from Newly, "I told ya we should have come by here in summer."
The dwarf grunted in reply. Gustav fidgeted. It made the monk nervous being a nude female, even if she wasn't human.
Gildrid spoke up. "Newly, do you has anyone come through here recently? Any men in masks, or monsters?"
Again, asking about "recently", didn't always get you the response you wanted from the dryad.
"Things don't come here anymore", she said. "My tress protect me."
As if in response, a light wind rustled the trees, although no wind blew out on the plains.
"Thanks you, Newly", Gruffydd said as he filled a canteen from the stream. He looked at the position of the sun in the sky."We best be going".
As they rode out of the glade, Nemon looked back in hope of one more look at the dryad, but she was gone. Then a unseen branch almost knocked him from his horse.
When they reached the wagon train again, it was nearly dark, and most the caravan was making dinner and preparing for bed.
They found Lars speaking to a mounted man, while Lud picked his nose.
The horseman rode off down the old trade road.
"Where's he headed?" Gruffydd asked.
Lars looked at him with a scowl. "Last time I checked, I was the Caravan Master and answering only to Von Aldensburg".
The dwarf responded with his own scowl. "Where that man's headed is a bridge. Under that bridge is the biggest, nastiest, craziest troll I've ever run into. You don't want to head that way."
"That's why I sent a scout". And the conversation finished, Lars walked away, Lud in tow.
The party spent a fitful night. Wolves howled in the distance. A strange wind blew criss cross over the camp. A general feeling of being watched....
The next morning the scout's horse returned, covered in blood. 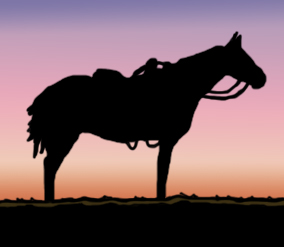