Fire burned through Gildrid's veins. Pain, ...such pain. He dropped his shield and the spider with it. Laramine sprang forward and cleaved the spider in two. He quickly pulled out a vial containing the Tears of Verena to administer to the now collapsed elf. Black and blue veins of poison spread from the bite mark like a web. Laramine pressed the healing potion to Gildrid's lips and forced a drink down. The elf came to consciousness.
The spread of poison stopped, but had not been cured. Gildrid felt terrible. His muscles burned, and his vision blurred. Laramine helped him out into the sunlight and the square beyond. It was then, that Nemon finally won his battle with the temple door. With a great crash, it caved in, Nemon stumbling behind.
The others now swarmed inside. The temple was a round, domed, stone structure, sparse in it's decor. There was a raised dias at the far end with a stone altar, and a statue behind of a stern looking, robed man. The dome above was cracked, and let a few rays of sunshine in. There were long wooden benches, jumbled all around. Several were stacked against the now demolished door. But there was no one inside. No bodies.
Laramine, used to sacking such places in his youth, stomped up to the altar and kicked it over. As he suspected, under the stone was small hole. In it, was small bag of coins, and a large gold key. The key looked like it fit the temple doors, as there were no other portals in the temple.
Gruffydd, had meanwhile, found a loose floor tile. He kicked at it, finally getting the toe of his boot underneath and shoving it off.
There was a rush of cool air, and on it, more of the strange whispers. There was a tunnel. It went through the foundation of the temple and into the earth beyond. The passage went straight down then eased into a ninety degree turn horizontally. Everyone looked at everyone else, waiting for a volunteer.
Gruffydd let out a deep sigh, "all right, I'll go first. Dimzad, you're next."
The dwarves dropped down the tight passage, shoulders scraping at the packed earth. At the bottom, they could see the tunnel was reinforced with roughly cut timbers. It wasn't pretty, but it was well constructed. "I don't like the looks of this." Gruffydd whispered to his fellow dwarf. "Seems familiar some how."
The end of the tunnel held a small, round door. Gruffydd examined it, while the others noisily slid down the hole. Dirt and dust fill the cramped passage.
The door, like the tunnel, was crudely, but well construct. It had simple wooden latch on the outside. Loud breathing, a snuffling, sniffing, noise came from the other side. That was when Dimzad decided to jab his dagger under the door. There was a loud "Squeeeeel" and then scratching at the door. Gruffydd shot Dimzad a dark look. He looked at the others and gave a nod. "Are we ready?"
He yanked the door open and the others flew past into the room with much shouting and war cries. It was enough to startle the two giant weasels beyond. They filled most of the domed, packed earth chamber, two huge versions of an every day weasel. They hissed and showed their teeth, backs arched.
Gildrid, even in his weakened state, managed to sink a few arrows into the closest. It didn't seem to notice.
Dimzad led the charge, axe swinging, bellowing the war cry of his clan. The arrow wearing weasel hissed again, gave a great pounced, and simply bit the top half of Dimzad off.
The dwarf's legs took a few steps, blood spurting from the ruined waist, and toppled. 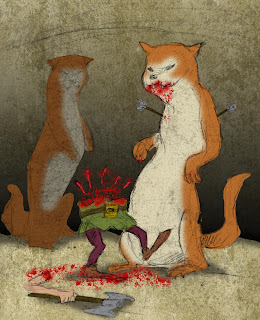 Side Note: Dimzad, the gods rest his soul, belonged to Lead Addict's middle son, a lad of 10 years. He took the loss of his first PC very well, better than I would have. It helped that the grownups all cheered his death, and called it heroic.
His secret background was he was the last of his kind, or in this case, clan. So farewell to Dimzad Ab Zogenbreth, known as the "Beardless", last of his clan. He joins his faithful goat Bob, in death and glory.
Posted by BaronVonJ at 7:07 AM