Though it was cold and rainy outside, it was hot and smokey inside the Hole. By the fire sat six adventurers, bound by past quests, and spilt blood. Gildrid, newly freed from the Land of the Dead and looking paler than ever, sat closest to the fire. Beside him was the halfling thief known only as Miss Adventure, munching on her cheese, seemingly oblivious to the conversation around her.
The talk centered around their next mission, led by the nominal leader of the group Gruffydd, the old dwarf veteran. They had been languishing inside Wall for months, waiting for a break in the terrible autumn downpours. There seemed no end to the weather in sight, and they were steadily using up their gold.
"Lake Merr,"Dimzad, the other dwarf present shouted,"we should head for Lake Merr. I heard there's something living there. Sea monsters mean gold."
Gruffydd shot him a tired look, "And how, do you suppose, we fight some lake dwelling sea beast? Drag a boat for leagues? Do you have some magical potion for breathing under water I don't know about?"
"There's always the rumors about the village." This comment came from Nemon, the fighter from the Free Cities. He stroked his well-oiled mustache. "I hear of a village where the voices of dead can still be heard. Haunted villages might bring treasure. What say you, Laramine?"
His question was directed at the new man, Laramine, a veteran sea raider of the Kraken's Teeth. They were a cold, hard people, who still made their trade from plundering the coasts.

He was huge hulk of a man, accustom to hardship and blood. Gruffydd eyed him over his pipe. "I lean towards the village, but we can put it to a vote". All voted for the village, save Dimzad, who sullenly turned his attention to his soup.
Gruffydd shuffled over to the bar. The old barkeep Tancred collected rumors, like others collected coins or fine art. Gruffydd slid five gold pieces across the bar. Far too much for a tankard of ale. "What do you know of a village Beyond the Wall? One that was abandoned. One where the dead still whisper."
Tancred eyed him with his remain eye. There was one I heared of. Ordiland? Ordilock? Something like that. Was a nice place. Rich place. Made money off a furs and commerce along the Old Trade Road. That was back when the Dwarves still held the northern passes, and the Empire still had contact with the coastal cities. 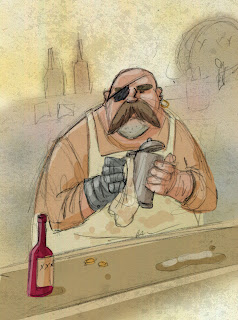 Almost over night Ordi-whatever, emptied. People just disappeared. Only one survivor I ever heared of. She showed up in the middle of the night, banging on the gates. Had a small child with her. She was babbling about creatures in the night, attacking her village, getting people even though they were barricaded in their houses. She died soon after. Her boy has been living in the Royal Stables, mostly watched over by the Stable Master. He might have more information."
Gruffydd and walked out into the rain seeking the Stable Master.
Posted by BaronVonJ at 11:31 AM