A Long Walk in the Rain

The others at the Hole hadn't been idle while Gruffydd was at the stables. Asking around, they had collectively gathered that the village of Ordilac or Ordilan (no one could decide on the real name) was somewhere along the Great North Road, across a river. This would be further Beyond the Wall than any in the party had ever gone. To complicate things, it seems a toll would be exacted at the bridge. Tancred, the barkeep, was unusually evasive about what the toll was. Was it in gold? In blood? He simply stated to "say hello to Old Nik" and "tell him Tancred gives his regards to his brother, Clem".
So, uncertain of their exact destination, and what they might find when they arrived, the party set out into the cold autumn rains. Weather kept the usual onlookers from watching them go. Only Sergeant Malloy witnessed their departure, and he was silent save the usual chuckle and head shake he gave them.
The Great North Road had been steadily deteriorating from lack of upkeep, and the elements for years. Combine this with steady downpour, it and took longer than usual to reach the deserted logging camp, and Newly the dryad's tree. They rested under it's branches, now covered in the orange and gold leaves of fall. Small saplings had sprouted in the area since their last visit. The little trees were trying to reclaim the area now covered by stumps.
Newly!", Miss adventure called, "Nuuuuu-leeeee!"
"Since when are you pals?", Gildrid said, sullen and wet beneath the tree.
"Shut up." The halfling replied. "I like her."
"First time you met her, you wanted to kill her," he murmured.
A shape emerged from the great oak. It was not the pale little girl they were accustomed to. Before them stood a tall, elegant, dark skinned woman in her middle years. She had fiery red hair, tangled with a few leaves snagged in the curls. Her eyes were a deep brown, like polished wood. She wore but a slip of a dress, that looked like it was made of cobwebs instead of cloth. When she spoke, it was with sound of rustling leaves, "Who calls?" 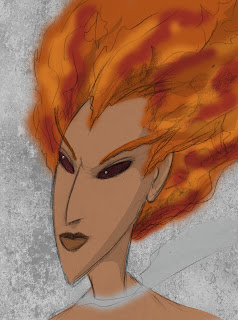