Another visitor to the campfire

The drone of wings was almost deafening. Logun ran up the river bank, away. Arrows, rocks, throwing daggers, were all being hurled at the strange wasp-like things. Those that hit, bounced off harmlessly.
"We seem to have upset the nest!" Nemon shouted over the noise.
"They're not making moves towards us," Gruffydd yelled," they must be guarding something in that keep."
Without further word, Miss Adventure plopped down on a rock, and started putting on her magic boots. With a whush of air, she was gone.
Inside the broken tower, the halfling discovered interior walls packed with eggs, dripping a golden goo.
"Blech!" she she said with a shiver, and dashed out to the others. "The only thing in there is some gross looking hivey thing," she said to the party.
Gruffydd, looking over his shoulder to where Logun had disappeared, shouted, "Still, it bears investigating later. Let's get out of here." Just then, one of Gildrid's arrows struck home. The wasp-man-thing fell from the sky with a squish.
"Run!" he yelled as the drone grew louder. The party mounted, and raced up the river back, and didn't stop till they reached the road again. Out of breath, they found Logun gathering wood for a fire.
"I though everyone could use a drying off", he said.
Wet clothes were placed by the fire. A quick review of their packs found some of the rations ruined by river crossing.
"Logun," Gruffydd asked, "you're a trapper. Care to find us some meat?"
With a shrug, the old man headed for the woods.
The rest of party prepared for the evening. In the hazy distance, up the road, a ruins of large village stood. It would be another days march to their destination, if in fact, this was the village they were looking for.
By nightfall, Logun had not returned. The watches were set, and one by one the group retired. "Good," Dimzad said with a huff," I hope the ol' geazers dead."
During Miss Adventures watch, a rustling was heard in the nearby woods. She had been happily munching away on what remained of her rations, when she spied a dark shape at the edge of the trees. This shape exploded from the under brush, autumn leaves flying everywhere. With a heavy thump, a mass of teeth, claws and fur dropped into their campsite. The biggest wolf she had ever seen... 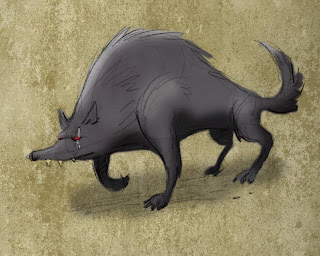 Posted by BaronVonJ at 7:35 AM