It was a cold a wet walk to the Royal Stables. There was no use in being quick, the stables were on the other side of town, and Gruffydd would be soaked by the time he got there, no matter what speed.
The Royal Stables was a vast complex, capable of housing hundreds of horses, from a time when mounted patrols still ventured Beyond the Wall. It was now mostly unused except for a dozen horses and countless mice, that now called it home. The ancient stable master Hogarth was shoeing a horse when Gruffydd arrived, soaked and in a bit of a foul mood. Hogarth indicated Gub's location with a wave of his hammer, and mumbled warning, "Be careful with young Gub, mind ya. He's a bit slow. Mule kicked 'im in the head when he was little, and we watch out for 'im. Bit of a mascot around here."
Young Gub, as Hogarth called him, had grown to be a burly teenager. He was twice Gruffydd's size in height and width. He was in deep conversation with a  mouse when Gruffydd approached. 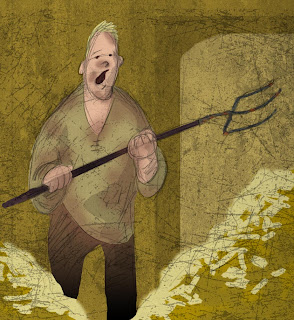 "Err, Gub is it?," The dwarf asked. "My name's Gruffydd. Mind if I ask you some questions?" Gub looked up. His face definitely looked like he had taken a blow to head. He also looked a little embarrassed and quickly grabbed a pitchfork and began moving hay.
"Gub, I need to ask you about the village you came from." The giant turned his back and worked harder. "I know you very young," he dwarf continued, "but anything you can remember about it would be helpful."
"Me Ma's dead", Gub mumbled. "She died when I was little."
"I'm sorry to hear that", Gruffydd said,"but I need to know about your village."
Gub turned, and eyed Gruffydd. "Me Ma told me stories sometimes."
"Go on" said the dwarf.
"She said people kept dis-pearin' from the village at night. Sometimes behind locked doors. Everyone was scared. Then one night, they came." Gub had started to tremble slightly.
"Who came?", Gruffydd asked.
"They was in our house. Lots of 'em. They swarmed all over Da, all claws and teeth." His voice had become a wail. "Red eyes!" Gub screeched and pulled at his hair. He dropped the pitchfork and began curling into a ball. "Red eyes!"
Before Gruffydd could speak, Hogarth burst into the stall. "What's going on in here?" He moved to comfort the boy. He glared at Gruffydd, "Didn't I tell ya to be careful with 'im? There, there Gub. It'll be all right. Shhhhh...."
Gruffydd turned, and trudged out into the rain again. More confused than before.
Posted by BaronVonJ at 12:12 PM