Return to the Well of Souls

The unrelenting heat finally broke over Wall. Citizens and adventurers alike crept outside to enjoy the cool weather. After their humiliating last effort, Miss Adventure and Gildrid wanted another go at the lands Beyond the Wall. They gathered the rest of their adventuring crew, and set out early one morning.
Again, following the advise of the Lord Marshal to avoid their familiar routes, they left the Old Trade Road and headed cross country. The one place they knew to cross the river that bisected their route east-west, was the ford at the broken towers. It would take two days to reach it, and once there, they would have to be careful of the hornet like creatures that dwelled in the far tower.
Their two days past uneventful. The only other living soul they saw was a hawk circling high in the cloudless sky. By midday they had reached the ford. Crested the hill that led down the river, Gildrid spotted movement.
The rest dismounted while The elf and his cousin Mellion watched from the safety of the trees. The near tower definitely had activity. They waited, and just as they were sure their eyes were playing tricks large shape emerged form the ruined tower.
It was a hill giant. And it seemed he had made their only crossing point his home. The grouped watched as the massive humanoid slumped outside the ruined tower and settled in for an afternoon nap. 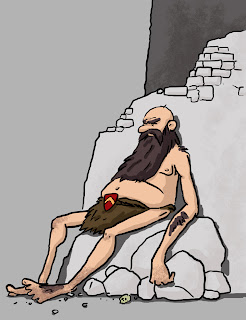