With no apparent outlet, they back tracked.
It didn't take long before a few loose pieces of gravel and a scrape on the floor led to a secret door. It was small. Nemon would have to strip off his armor before he could squeeze through, but it was their only choice short of facing the Manticore. A meeting they would not likely survive.
Miss Adventure went first. The other side of the door turned out to be a small altar carved into the wall. It was probably a bowl for purified water at one time. But the small temple room was now a foul smelling bedchamber off a larger room. She could hear raised voices coming from the other side of a tattered blanket that separated the two spaces.
She crept up to the door and looked through one of the many holes in the blanket.
A half a dozen goblins filled the roughly square room. They were shouting. One goblin guarded the only door out of the chamber. He peered nervously through a metal grill in the door.
The rest were poking two dead lizardmen on the floor. These must have been the wayward lizards that had led the party here, caught while sneaking about.
Above them all sat a massive yellow skinned goblin in an oversized chair. He was twice the size of the rest, almost man sized. He wore ill kept armor and a massive gold chain around his neck. Upon his head rested a crude iron crown. 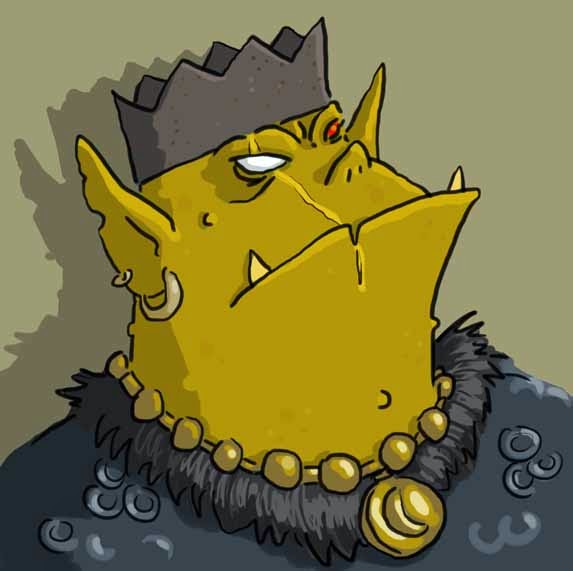 Posted by BaronVonJ at 5:51 AM