The room was quickly filing with noxious fumes. Gruffydd turned to nearest door and began smashing it with his hammer. Meanwhile, Miss Adventure sprinted to the far door and began to work its lock. The others were crashing to the floor, unconscious.
With a "sprang" the halfling's door opened. The gas stopped pouring out. Miss Adventure and Gruffydd began dragging the others out of the room. Most coughed up a green, slimey flem, but were otherwise unharmed.
They were in a hallway that ran south, but had a branch to the left not too far away. While the others recovered, Miss Adventure checked it out.
Beyond the hall was a room with a three branches. The far branch had a reinforced door. The north was hall headed back the way they came. To the south was a large double door. It showed terrible damage. Something large had clawed at the doors, trying to open them. More importantly, outside the doors were two columns. The bodies of two goblins were impaled on the pillars by long, black stakes.
"What's up?" Miss Adveture nearly fainted.
While her attention had been on the corpses, Gildrid and the others had walked up behind her. She pointed.
After a few moments, Gustav said, "I think we should head back that way," he pointed down the hall. "Maybe it links to where we came from. I'm exhausted and we are short on Healing vials."
There were nods of agreement.
Not far down the corridor a door appeared on the right hand wall. Unlike the rest they had seen, it was not reinforced, boarded, or even damaged. Miss Adventure started to pick the lock, but found it open. A quick listen reveal nothing.
After they readied themselves, Nemon pushed the door open. It got stuck but he shoved harder. It seems the door got stuck on all the silver coins covering the floor.
The light of their torches reflected off the the thousands of coins jewels filling the room. No one breathed.
Before they could set foot int the room, a dark shape moved from the doorway opposite. In a blur of motion a huge beast lunged at them! 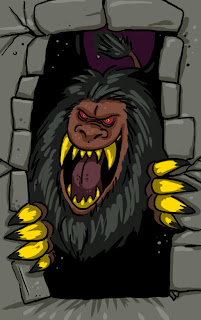