Goroth the Mighty, Slayer of Kings, son of the war god himself, lived centuries before the founding of the Empire. He was the Hand of Death for three separate Kelmorian kings. So feared was Goroth that neighboring monarchs often capitulated rather than face him in battle.
When he finally did meet his demise, it was not on the field of battle, but in the bedroom of his lover, slain by his own Shield Bearer out of jealousy.
A great tomb was built by his last lord, Belmorca. It was extravagant for it's time, carved in runes and etched in gold leaf. So loved was Goroth that twelve of his finest warriors agreed to be buried alive to guard him in the afterlife.
Goroth's tomb sat undisturbed for centuries and it is only recently that rumors have surfaced that some misguided adventurers unsealed his crypt. It seems Goroth has had a troubled sleep. He has awakened, they say, bent on recovering the lost kingdom he once so loyally served. 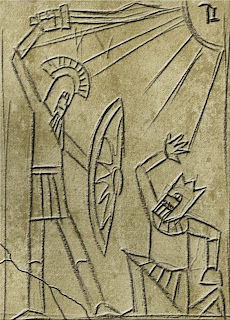