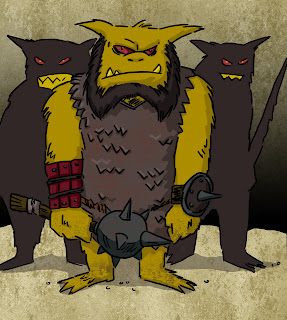 Bugbears, probably the most dangerous of the goblinoid races, are scattered around most of the lands Beyond the Wall. At the Empire's zenith, bugbears, like most monsters were hunted to near extinction. They have made a dramatic comeback in recent centuries thanks to their strong clan ties and high birth rate. Whole clans are often hired as mercenaries by particularly evil or desperate warlords of the Wilds.
Bugbears are a warlike bloodthirsty creatures, created in antiquity some say, as assault troops for a mad emperor. If true, it is quite ironic, as bugbears have been in the forefront of many of the Great Incursions.
Adventurers Beyond the Wall are just as likely to run into these cunning brutes guarding a treasure horde in some dark hold as haunting a great wood. Either way, they are a deadly opponent, in need of a wide berth. Captives are taken only as food, to be eaten alive.
Posted by BaronVonJ at 11:30 AM