A New Adventure, a New Friend

Barely a week had past since our intrepid party had returned from the ruins of the lost village, when they decided it was time for another shot at fame and fortune. They had not recovered much loot, and finances were running low. It was decided that adding a cleric to their ranks might increase their chances of survival. A holy man could heal their wounds and maybe their luck. It was only a few days after nailing a posting to tree outside the Hole, that a cleric appeared. He was young, but full of vigor, and scrapping for a fight. The Lost lands Beyond the Wall were in need of some Religion, and Gustav was the boy, err man to do it. 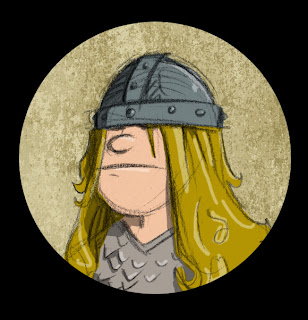 Gustav had survived a great cataclysm, he said, but was tight lipped about which one. His god was great and powerful, but a again vague, about who they were. He carried a great two handed flail. With this he would vanquish the impure, and spread the Word.
Posted by BaronVonJ at 1:31 PM