The beetle moved ever forward. The heat from the flames was on them. Nemon and Laramine brought their shields up to block the entrance to the small room. Gildrid was weak, but still able to loose a few arrows at the fire beetle by propping himself up against a shelf. The arrows clattered harmlessly against the beetle's tough armor.
Stil the beetle move ever towards them. The party could hear the yelps and taunts coming from the kobolds marching behind. The men's shields began to smoke and sizzle. Miss Adventure had enough. She began throwing anything she could find inside the pantry at the beetle. Jars of strange liquids and fermented staples shattered against the fiery insect. A jar full of yellow, foul smelling goo hit it square in the face. It stopped, shaking its head. The kobolds were prodding it from behind with spears.
Then, Miss Adventure hurled a mason jar of blue paste. BOOM! The shockwave knocked all four of the party down. The hall was full of stunned and dead kobolds, and a very charred, smoking beetle.
Laramine and Nemon charged forward stabbing the living kobolds that were too stunned to fight back.
Singed and a bit wobbly from the explosion, they headed down the hallway where the beetle had come from, ladened with whatever they could carry from the kobold "pantry".
The corridor ended in an open door. The doorway opened into a large hall. Furs and sleeping mats covered the floor around the edges, against the walls. There was a raised platform. On it sat a throne, and on it a large kobold. Well, large for a kobold. Standing, he probably didn't reach Laramine's belt.
Behind the kobold king, a dozen warriors stood, ready to attack. They hissed and barked, gripping their weapons, shooting glances at their sovereign, waiting for the order to charge the interlopers. The king stood raising a great mace. He tapped it on the floor and the mace's head exploded into blue flame.
All four party members uttered the same words at the same time.
"I want one of those." 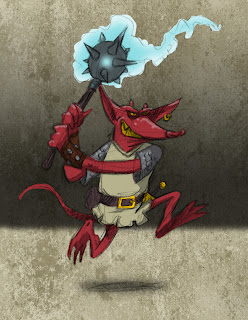